If this skill test is successful, choose a card not named Resourceful in your discard pile. Add the chosen card to your hand.

Audrey Hotte
The Path to Carcosa #39. 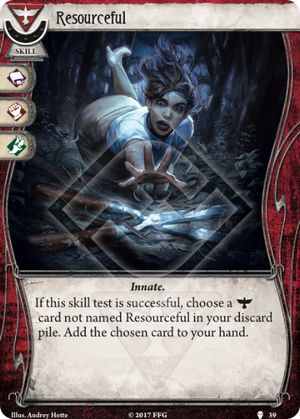 Recursion of things in any game is incredibly important and always worth looking at.

Resourceful is such a great card. Being able to recur any Survivor card of your choice back into your hand is just amazing. The fact that it applies +1 to three stats means it can be flexibly thrown into just about any skill check (short of helping Mystics out with their spells or trying to avoid most Encounter cards).

Resourceful acts as copies number 3 and possibly even 4 of your favorite cards. More Lucky! to help spike tests you are just about to fail? More Look What I Found? for fast clue gathering? More Will to Survive for even more insane turns? Actually, the best time to use Resourceful is right after you play Will to Survive to guarantee you can pull it back into your hand for the next turn.

Resourceful has a slight bit of trouble with Wendy's Amulet, as her Amulet will force event cards to the bottom of her deck. Timing when to play her amulet can be tricky given the presence of Resourceful. Regardless, you shouldn't anticipate this to happen, and should even use it if just to pull back other skill cards or asset cards that she can use to boost more stats.

Worst case scenario, you can throw this into a skill check to pull back another card with the intent of throwing it into another skill check. Sometimes, when you're low on cards, being able to push through a little more value in your tests is worth it.

EDIT: Is your name Silas Marsh? Do you sometimes draw Elder Sign chaos tokens? Do you just want to absolutely destroy the game? Talk to your Mythos Doctor and ask if Resourceful is right for you (Spoiler Alert: It is!).

I would call this the Vicious Blow/Deduction of Survivor. Pretty much an auto-include.

For me this card is one of the strongest Survivor cards out there, maybe even the game, and really defines the class. Being able to recur any card from your discard is just so helpful. It doesn't even cost an action, just a successful test (generally on your turn due to the icons it possesses).

It's part of so many combos. Think of this card as the 3rd and 4th copies of your strongest cards - whether thats a Will to Survive, Look What I Found, Lucky! or anything else that your deck does.... it just multiplies the value of those cards. Not sure what you want? Hold it for later! You are never unhappy to see this card.

This goes in virtually every Survivor deck that I've built, with the exception of Patrice Hathaway. It's just that strong.

It does have limitations. It can only be used to recur Survivor Cards. This generally means that off-class survivors aren't interested in this card. You also need to succeed a test. Most likely this means an evade, and you can get screwed.

Crash · 7062
I think for off class it's even better. Their main class tend to add skill bonuses for their job and having lucky to negate worst token or eucatastrophe for autofail is pure win. Then using resourceful to do it again gets even better. You may feel bad for having all those cards in your hand until you need them if you never draw the worst tokens, but you really shouldnt. — Django · 3807 7/21/21
I wouldn't call it better for them. Recurring "Lucky!" (3) is certainly better than recurring "Lucky!" (0). But it's definitely not useless. It will stay in the Minh deck I'm currently running for the remainder of the campaign. Mainly as 3rd and 4th copy of "Sharp Vision", but sometimes also just "Lucky" (0). — Susumu · 166 7/21/21
Regarding "Eucatastrophe" (off class only relevant for Matheo): you can currently only recurre that one, if you don't play with the Taboo list. — Susumu · 166 7/21/21
My personal take is that Resourceful is the best level 0 card in the whole game, and its precisely because it doubles as both helping you pass a test and drawing back the single most useful red card in your discard pile at any given time. With the exception of the Improvised suite, this is pretty much always a fantastic play. You can take back an event to replay it, or an asset that got defeated or ran out of ammo, etc, and there are many efficient ways even to get assets into the discard for Survivor (see Act of Desperation). The one person I will shout out other than Patrice who maybe doesn't take this is William Yorick, and that's due to his asset recursion already being built in as well as his Guardian off-class sometimes making it hard for him to have solid targets for Resourceful- you don't need the card to have him get his Chainsaw back, for example. — StyxTBeuford · 12593 7/21/21
best level 0 *after taboos* of course — StyxTBeuford · 12593 7/21/21
"Act of Desperation" looks great to me to recur with it for Yorick. One in my group is currently playing him and does that all the times. — Susumu · 166 7/21/21
I wouldn't call it the best level 0 card in the game, but it's certainly really good, and it scales really well into the late campaign because it can get back high-XP cards. In fact, the ability of this card to so easily recur high-XP cards is quite a problematic design and a large part of the reason why Survivor XP events keep getting Taboo'd. In the early campaign, I think Resourceful is fine but less spectacular. — CaiusDrewart · 2561 8/3/21