The Man in the Pallid Mask

Spawn - Location farthest from all investigators.

: Investigate. Your location gets +2 shroud for this investigation. If you succeed, instead of discovering clues, defeat The Man in the Pallid Mask.

"Indeed it’s time. We have all laid aside disguise but you." - Robert W. Chambers, "The Mask,"
The King in Yellow
Adam Lane
The Path to Carcosa #59. Curtain Call #19. 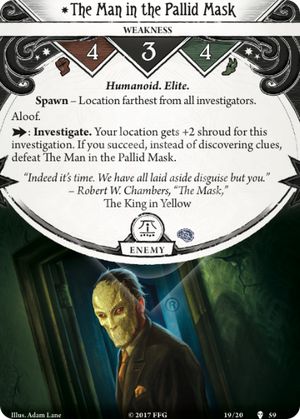 If I want to use the card -> Investigate, so what action is correct:

Emisario · 3
It's an Investigate action. Aloof only matters for Fight, so that SOMEBODY must be engaged with him to attack. — Susumu · 271 9/29/21
The answer is 2. — toastsushi · 62 9/29/21
Relevant section of the rules is under the activate action: "Activate" is an action an investigator may take during his or her turn in the investigation phase. An investigator is permitted to activate abilities from the following sources: ... A scenario card that is in play and at the same location as the investigator. This includes the location itself, encounter cards placed at that location, and all encounter cards in the threat area of any investigator at that location. — suika · 8839 9/29/21
1

Question (minor SPOILERS): The rules say that after an enemy is defeated, it is "placed in the encounter discard pile (or in its owner’s discard pile if it is a weakness." However, in the first scenario, The Man in the Pallid Mask has no owner, so where does it go the second time it's defeated?