Commit to a skill test only if you have 3 or fewer remaining sanity.

Cristina Vela
Echoes of the Past #117. 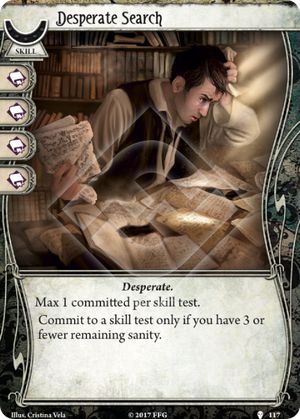 Ashcan Pete used to have the reputation of someone good in the early parts of a campaign but faded in the stretch. Yet there’s a class of survivor cards, less popular than the fail to succeed or discard/recycle focused ones. It’s another group, call them “aspirational.”

Essential to Calvin, they also work extremely well for Ashcan Pete. The desperation series can go into play immediately if you use your out of class slots to add Saint Hubert’s key. Duke will provide you additional soak, and Peter Sylvestre is vital.

The desperation series, it should be noted, don’t require the person taking the test to have three or fewer sanity, just that you do. Panic spreads; rise to the occasion and against all odds prove it. So go mad, and go faster.

MrGoldbee · 1233
I found the cards to be extremely strong but not much fun to play. With Peter Sylvestre and/or the Teddy Bear providing soak you aren't really in danger but suddenly you are great at everything. Throw in Yaotl and it gets even sillier. — TWWaterfalls · 852 11/16/20
I wholehartly agree, the combo of Saint Hubert’s key and desperate skills is great. There is another investigator, who can take it without using an out of faction slot and start at 3 remaining sanity with it: Diana with 2x Arcane Research! I just released a deck around this idea, and it works great! Other than @TWWaterfalls, I also think, she is fun to play that way. — Susumu · 211 11/24/20