Fast. Play when an enemy makes an attack of opportunity against you.

Cancel that attack. You get +2 skill value for the next skill test you perform this turn. 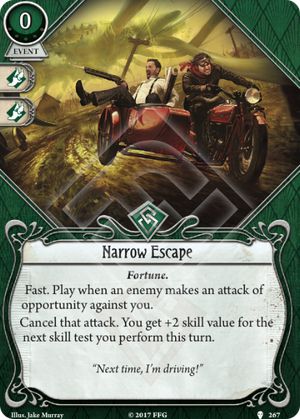 This card is really very good. Even ignoring the 2x Agility icons, it has lots of play. It's difficult to describe exactly what you would use it for, as its such a tactical card, with its use depending on the situation, but here are a few scenarios where I have found it useful.

Basically, it is often Unexpected Courage + Dodge, all for 0 XP, 0 Resources, and even when it isn't, it can function as a double-Agility.

It's in all my rogue decks, and I rarely want to take it out. It's up there with Elusive, Leo and Lone Wolf as one of the best 0 XP Rogue cards, in my opinion. It doesn't have as much impact, but it's got so much value.

Oh, and the picture is cool too.

duke_loves_biscuits · 631
I think you said it yourself though--this isn't high impact. I don't think a card that makes such a small difference in the game can be compared to something like Elusive or Leo. I agree that there are some nice little efficient plays to be had here, but really nothing gamechanging at all. Especially if you had to deliberately provoke the attack of opportunity rather than taking it in the normal course of events. — CaiusDrewart · 1750 7/5/18
It's a value card rather than an impact one. For the same reason I'm always going to play Guts or Uncage the Soul in mystic, or Shortcut in Seeker/Mark. You are right in that Elusive/Leo are probably bad choices for comparisons; better to consider it in the same family as those others listed. — duke_loves_biscuits · 631 7/5/18