Mythos
Act. Stage 2
Clues: –
This nightmare will not end until you stop the one behind it: Anette Mason and the spirit which possesses her. The world is falling apart all around you, and the coven is only bringing the end closer.

Remove 3 breaches from this act: Place 1 clue on a random location.

Matthew Cowdery
In the Clutches of Chaos #287. Music of the Damned #2. 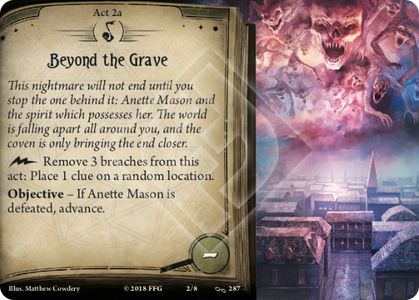 The Living and the Dead - Back

Act
Somehow, despite all odds, you have managed to defeat the resurrected spirit which torments Anette Mason. She passes out and collapses to the ground, but the revenant inside forces her eyes open and puppeteers her body in a lurid display. "Fools!" the ragged, disembodied voice of Keziah declares through Anette's lips as she rises once more. "You are naught but insects. I have seen the truth. I have seen the face of Chaos itself, and you will soon be a part of it. Now, come; join me, kneel before the Black Throne, and be one with the universe!"
You shudder as the words reach your ears. Nothing she says makes sense to you, but you can tell her intent is dark and wicked. "Leave this place," you muster up the will to command, "Go back to the beyond from which you were summoned, and never return." 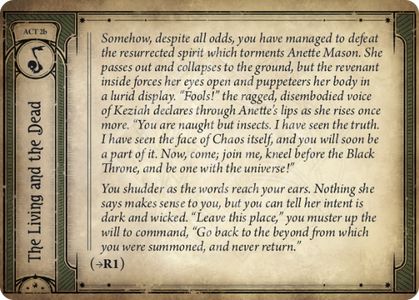