Mythos
Act. Stage 2
Clues: –
This nightmare will not end until you overthrow the one behind it: Carl Sanford and the Order of the Silver Twilight. Even with the world falling apart all around you, the cult seems intent on continuing their plot to the bitter end.

Remove 3 breaches from this act: Place 1 clue on a random location.

Matthew Cowdery
In the Clutches of Chaos #289. Secrets of the Universe #2. 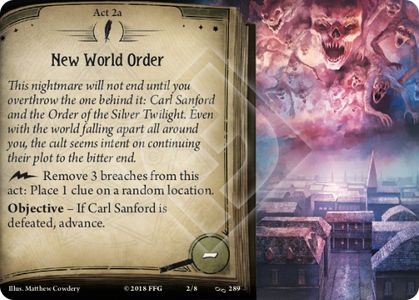 Of Gods and Mortals - Back

Act
Using force and ingenuity, you have managed to defeat Carl Sanford at his own game. The power he was drawing from surges painfully through him. "You imbeciles," he spits, "what do you think you have accomplished? We could have been immortal. Don't you understand? We could have been gods!" he struggles to remain on his feet, his strength waning as he loses control of his power.
"At what cost?" You reply, taking in the sight before you. "You would have made us slaves, not gods. Slaves to your greed and the Order's power. I'd rather stay mortal than be your thrall."
"Then we will all perish," Carl responds bitterly. "I could have made us into celestials. Instead we will be extinct. I hope you are satisfied." 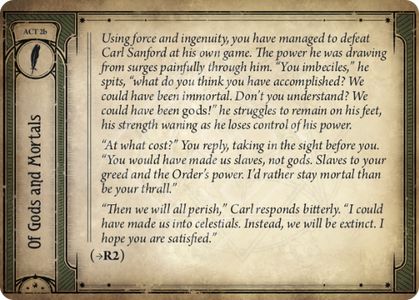