After you spend 1 or more charges from a Spell asset, exhaust Twila Katherine Price: Place 1 charge on that asset.

"Sometimes, this world... I wish I never came back."
Sacha Diener
Point of No Return #244. 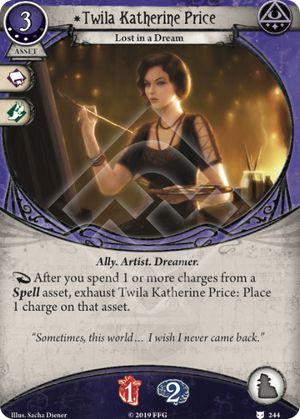 Shhhhh. We dont talk about how ridiculously good this card is.

Just put it in your big hoarding deck that started with a 5 investigator, stock up on the best spells in the game and go hog-wild.

You did'nt hear this from me. shhhhhhh.

Disclaimer: She is a cog in an engine decktype that takes a LOT of time setting up and lotsa resources already, make sure you have a lean and focused deck built for getting the engine built ASAP.

Tsuruki23 · 2350
It's too bad she doesn't combo with Seal of the Seventh Sign, as those charges are "removed" and not "spent." Oh well. — SGPrometheus · 688 3/27/20
She is basically the ally that I have always been looking for in Akachi decks (and several other Mystics). Akachi doesn't need Int or WP or any of the other special abilities. Play Arcane Initiate early and then play Twila late. — TWWaterfalls · 862 3/28/20
i used her in my norman scrying/stargazing deck, to be able to scry every round was simply amazing — niklas1meyer · 1 4/1/20
Does this work with True Magick? The timings and "As If" clause has me confused! As well as the word "etc" at the end of True Magick's card text. — joguitarist · 1 3/2/22
I have had a reply from the the FFG rules query form: "The way that True Magick works is that it essentially becomes that Spell card for the duration of its ability. Because of this, you could activate Twila Katherine Price while True Magick is being treated as that Spell card, and a charge could be placed on it." — joguitarist · 1 5/19/22