Forced - At the end of the mythos phase: You must either spend 1 resource or discard Dark Ritual. 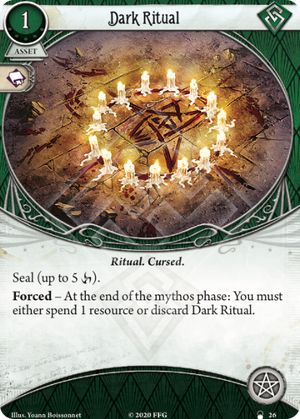 No reviews yet? It's bad. If you're afraid of drawing curses then don't put them in the bag in the first place. Most curse cards require you to put in curses as a cost so this card can actually prevent you from playing your cards.

It's always a shame to see obvious pack filler and that's exactly what Dark Ritual is.

KasaiAisu · 39
Some rogues either want to spend money every turn, like Preston with Darkhorse, or want to keep curses trapped until they’re needed. Your building elaborate combo, eventually you won’t need the 0XP parts of it anymore, but this does an amazing job for some characters, preventing Faustian bargain‘s from ruining your chances of success. And when you’re ready for the tokens, stop paying for it. — MrGoldbee · 1172 1/17/21
This also prevents curses from being used up by tests if you need a specific amount of them for other card effects. — Django · 3892 1/17/21
Yes, it's definitely a very situational card, but that is not the same as being a bad card. You shouldn't throw it in a deck on a whim; you use it when you have a specific reason for wanting to store curses. — LivefromBenefitSt · 835 1/17/21
0

You know what I was really really expecting to see come out of Innsmouth, a higher level dark ritual with one change.

"...Spend 1 resource or release 1 curse sealed here. If there are no tokens sealed on dark ritual discard it."

The main issue with curses is having a lot of them around all at once, if you only have 2 curses about they are nowhere near as deadly and a single false covenant can easily just siphon them out of the bag, having a card that turns a large dumping of them into a slow drip feed would have been really useful, but I guess favor of the moon does that a lot better.

Given how much curse erasing exists just in survivor I don't see why you would run Dark Ritual for that, the biggest and best rogue curse card is Faustian bargain, it seems a little silly to use that and then follow it up with a resource sink.

Using dark ritual for short bursts seems to be the only use case it has, when you have a turn or two where failure can't be tolerated you can throw it down and spend the 2/3 resource cost to keep curses at bay, but even then at level 0 this card still looks poor compared to what tides of fate can do.

I'm trying my hardest to think if there's a reason you'd want curses sealed for the sake of it, like with guardian cards that can grab sealed blesses but I can't think of anything, I like to think every card has some amazing power if used well but for now I concede to Dark ritual.

Its coffin was carved by False covenant and buried with Favor of the moon. I hope like with all cards one day I will see where its power lies, every card is amazing in the right place, this one is probably going to need to see return to Innsmouth before that place arrives.

Zerogrim · 232
This card is honestly fine at level 0, when the Rogue doesn’t yet have cards like Skeptic or Covenant or Favor of the Moon to get around bad curse effects. You will probably want to upgrade out of it, but even just sealing some curses for a turn or two where the tests might be critical for your fellow gators isn’t a bad move at all. Faustian nets 5 resources for your group, so spending 1 or 2 to seal some back seems just fine to me. — StyxTBeuford · 12620 4/11/21
If you're going to play Faustian then seal the curses, group benefits aside you may as well have played an Emergency Cache. Or if you really want to share resources, a Stand Together (0). — suika · 8292 4/11/21
About the only reason I can think of to play this is to help the seeker translate Cryptic Grimoire. — suika · 8292 4/11/21
Yea helping translate the grimore is real handy, and its the obvious deckslot filler for when you want another curse card later down the line, I think the card really only exists so the rogue player who turns out to a table with curses doesn't get boo'd away at level 0. — Zerogrim · 232 4/11/21