Card design inspired by the events of Arkham Nights 2018. 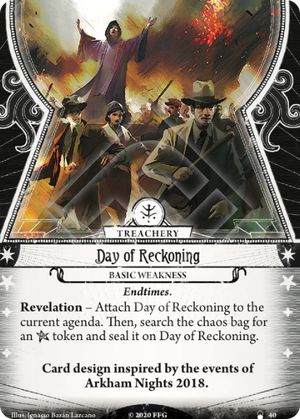 So if you take 20 skill tests in the time it is active, you should at worst expect to lose one of your skill tests due to this card on which you would have succeeded otherwise. I guess it might be annoying when you draw it early on an Agenda with a high doom threshold (for example in Where Doom Awaits).

PowLee · 10
I wholeheartedly agree. For reference, this was spoiled after Dread Curse and Accursed Follower, so I was in no way expecting a third weakness. This is for sure even less impactful than either of those. — StyxTBeuford · 12523 10/1/20
what would happen if the token is already sealed? would this weakness then do even less (nothing)? — Qurx · 1 10/2/20
You aren't taking into account the extra effects of the elder sign, that are dependant in each investigator. Some are certainly hurt more than others with this because it takes away the ability to high-roll things like extra action economy. Although if the token is already sealed it just attaches to the agenda and does nothing. — The_Wall · 240 10/3/20
But like, how long is that Elder Sign gone for? Assume the average agenda is 8 rounds, and you could draw these just as likely towards the end as the beginning. So you're going 4 maybe 5 rounds on average without your Elder Sign. Okay, in a 4 player game, that is 16-20 tests on the high end. You expect to draw 1 Elder SIgn in about that many tests, and it could just as well been on an investigator who doesn't have a good one. The only person this really hurts is someone who is deliberately seeking the Elder Sign, like Father Mateo. — StyxTBeuford · 12523 10/3/20
Notably, Mateo could hide the Elder Sign away on his Codex until he draws this, though that certainly won't always be possible. — Zinjanthropus · 170 10/4/20
Keep in mind that this also affects the rest of your team, so I think that hitting 20 tests on average is going to be a thing for sure. In addition, I will say that the elder sign effect on some investigators is far more than simple pass/fail. So I think it is more impactful than the review above states, though in no way as bad as some other weaknesses. — Veronica212 · 150 10/5/20
Funny thing to notice- Daisy will often find this improves her odds because of Necronomicon. — StyxTBeuford · 12523 10/6/20
3

There is one investigator for whom this is particularly horrid. If Jacqueline Fine is sitting down at your table, don’t even shuffle this one in. It makes her weakness, Dark Future, unable to be resolved.

MrGoldbee · 1101
Thankfully it's attached to the agenda so it can disappear with time. — jdk5143 · 96 10/14/20
Still, up to 10+ turns of not using your core gimmick? — MrGoldbee · 1101 10/14/20
There are only a small handful of scenarios with an agenda that long, and you would have to hit both weaknesses very early in the agenda. In exchange, it’s one of the least impactful weaknesses in the game most of the rest of the time? And it doesn’t even stop her from using her gimmick on cards such as Voice of Ra, Recharge, or Hypnotic Gaze? I’m not especially concerned. There are far more punishing combinations of basic weakness and investigator. — Death by Chocolate · 894 10/14/20
Depending on difficutly, this may also prevent you from playing crystalline elder sign or it's 2nd copy. — Django · 3683 10/14/20
I'm not even sure this is that bad for Jacqueline, especially since it requires you to draw both weaknesses in short succession. It's still laughable compared to other bad deck-weakness combinations like Doomed in Patrice, The Tower in Minh, or Paranoia in a big money deck. — PowLee · 10 10/14/20
In MrGoldbee's (or Mr. MrGoldbee's, we haven't been introduced) defense, it is an annoying weakness in all cases, less annoying in some scenarios (e.g. Essex Country Express) more in others (e.g. The Doom of Eztli). It does threaten Jacqueline particularly badly. I agree there are worse Basic Weaknesses (e.g. The Tower), but it's a reasonable review. — LivefromBenefitSt · 742 10/14/20
More to the point, when you search the Chaos Bag for a token, do you "reveal" it? If so, could Father Mateo use his ability to treat the Tentacle as an Elder Sign and seal that instead? Could Many use her ability to seal an extra token (say, the Tentacle)? On checking, I see that it specifies "deck." Bah. — LivefromBenefitSt · 742 10/14/20
While it is true that it could stop you from playing CES or Mateo's Codex, those cards could also prevent this weakness from doing anything at all. Also, arguably a positive thing for Daisy. — Zinjanthropus · 170 10/14/20