During this skill test, treat the modifier of each and each token as +1 instead of its normal modifier.

"Oh, hooey. What's the worst that could happen?"
Stanislav Dikolenko
In Too Deep #115. 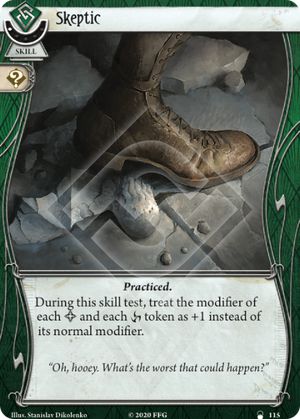 Skepticism is only relevant when there’s something to deny. So a plus one to a skill test isn’t that useful. But when you and your teammates have made Faustian bargains, tampered with the tides of fate, and filled the chaos bag with curses, this card is super good to help you clean up the mess. With the help of Jacqueline, Olive McBride, and the greatest statue, you can cast your doubts on a huge amount of the bag. At that point, succeeding massively at a skill test is secondary to making every subsequent one easier.