The first time an investigator is captured, read the following:

You are bound and dragged deep underground, then thrown into a sealed prison cell, surrounded on all sides by dripping stone walls. Your cries fall on deaf ears as your captor's footsteps fade into the distance.

Remove the captured investigator from their location and return each asset in that investigator's hand slots to their hand.

Turn that investigator's mini-card sideways to indicate that they have been captured. Captured investigators cannot move, fight, or be engaged.

Flip this story card over to its "Holding Cells" side and put it into play. It is not on any existing row or column, and is only connected to Sunken Grotto locations through its connection icons. Place the captured investigator in Holding Cells.

From now on, whenever an investigator is captured, resolve this same effect (return each asset in their hand slots to their hand, turn their mini-card sideways, and place them in Holding Cells). 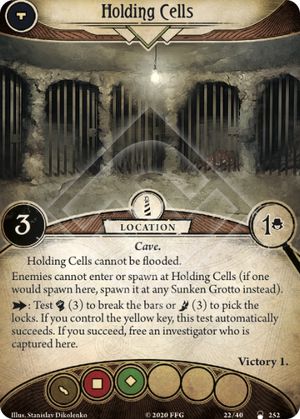 Enemies cannot enter or spawn at Holding Cells (if one would spawn here, spawn it at any Sunken Grotto instead).

: Test (3) to break the bars or (3) to pick the locks. If you control the yellow key, this test automatically succeeds. If you succeed, free an investigator who is captured here. 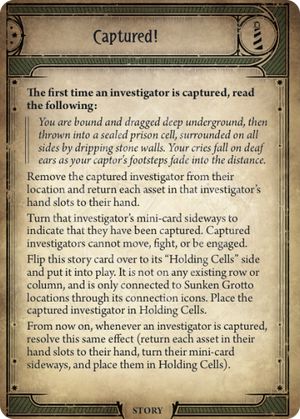