"If I said that I could tell you when you were going to die, would you want to know?"
Alice Duke
Edge of the Earth Investigator Expansion #66. 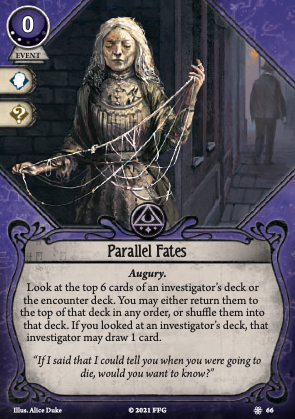 So this is one of those cards that improves in multiple (very noticeable) ways on upgrade from Parallel Fates.

Second, it doesn't have a 'failure' chance. Unlike Parallel Fates where if it whiffs you've lost your planning advantage, the card and the action, the leveled up version doesn't require a token draw. Note that you can still shuffle the deck if the 6 cards you see are particularly unappealing, but it's likely a fringe case as having knowledge of upcoming encounter cards is likely better than shuffling and you can put the 'problem' card or cards at the bottom of the 6 card stack.

Lastly, it can be used on investigators! Look at 6, draw 1 allows your buddy (or yourself) to search for an important asset early on in the scenario. It can also let you dodge or plan for weaknesses later on (Hey, you'll draw your weakness 4 turns from now, be ready!). This one makes a bit more sense to shuffle if none of the cards are useful so you can get to a part of your deck you want to see faster and not have to draw through 6 duds. Also note that the targeted investigator does not have to be at your location.

Overall it seems like a high quality card that has good versatility. I think parallels (ha) can be drawn to Cryptic Research(4) for drawing key cards (digs 6 instead of 3, but isn't fast, 2xp vs 4) or very favorably to Scrying(3) (1 action to look at 6 instead of 9, 0 cost vs 1, 2xp vs 3).

Apart from the straightforward uses for encounter-deck-mitigation and card-selection, this is a fantastic tool for letting Lola Hayes mitigate her (potentially crippling) weakness, especially if her deck is low-cycling. If you see 6 non-weakness cards---great, you know you can sit in any class safely for your next 5 turns! If you see one of her weaknesses, make note of where you put it, and then be sure to switch classes to something with no assets out just in time to draw it.

Compared to Scroll of Secrets (3, seeker version), this gives slightly fewer safe draws (5 vs 6), can't be tutored by Research Librarian, and doesn't auto-discard weaknesses it finds, but is much more flexible in what roles Lola can sit in (you aren't locked into swapping back and forth with Seeker continually), doesn't take a hand slot, and can be played on Lola by a friendly mystic, not just by yourself.