Blood Will Have Blood

Fast. Play after an enemy attacks you. Max 1 per attack. 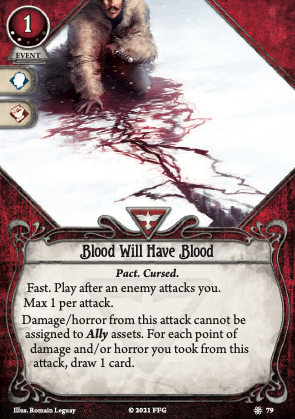 I can maybe... maybe... see this card in a heavy-soak deck. (Non-Ally soak, to be more precise.) The problem is, it costs one card and a resource to play, so it's really only cost-efficient if you're taking three damage/horror at a time, something that most players try to avoid. Well, if money isn't an issue, you get a net benefit at 2 damage/horror, but nonetheless, it's hard to justify taking. It would be a good but niche card at 0 XP. I can't see it being worth 2 XP.

Xelto · 6
The obvious candidates for this are Tommy and Yorick, who both kinda want their teddy bears and coats to die anyway. — dezzmont · 160 10/22/21
Taking 3 total damage/horror at a time isn't just something that most players avoid -- it's something that is RARE to even encounter in the first place. (It has to specifically be an attack from a single enemy.) 1 damage+1 horror is the overwhelmingly likely typical best case. — anaphysik · 83 10/23/21
do you take this for final levels of a campaign where 4+ damage enemies are pretty common? — Zerogrim · 262 10/23/21
No, because taking the damage on teddy bears and leather coats also costs you actions to play them back (for Tommy) and recursion opportunity costs (for Yorick). Even Calvin at the end of the campaign usually ends up with too much trauma to take damage/horror willy-nilly like that. Standalone Calvin, perhaps. — suika · 8839 10/23/21
Seems like really tough value when things like Glory or Unrelenting can get you there quicker for less XP. You're not going to want to wait for the boss to speed yourself up and then there's the big direct attack to take. — housh · 141 10/23/21
This is a cantrip for the Daniela attqck bait archetype. Seems solid to me. — StyxTBeuford · 12744 10/23/21
2 XP for a cantrip (that doesn't work with soak) is not good? I think it would get play at level 0. — housh · 141 10/23/21
It almost certainly would see play at 0, simply because of Tommy and Yorick and their predisposition to triggering this anyway, it would be extremely rare for this not to be a cantrip in most scenarios at some point for those characters. At 2 XP its a bit much: I don't consider the re-play window on Yorick or Tommy's action cost to get em back significant (Your actively trying to kill them with Tommy ALREADY and Yorick mostly uses his replay windows late game for tank anyway), but the XP cost is pretty rough, especially on Tommy who has the standard guardian woes, but even Yorick is an unusually expensive Survivor because he is one of the few users of a 4 XP card. Might hit the sweet spot at 1 for those two though as a filler card to help draw doing what your already doing in those characters.. — dezzmont · 160 10/25/21
At 0xp, it'd be a more unreliable Glory with potentially higher upside. Tommy and Yorick definitely don't lack for filler cards though. — suika · 8839 10/25/21
Does this even work with the coats and teddy bears and the rest — jmbostwick · 11 5/26/22