Revelation - Secretly add this card to your hand.

Forced - When the game ends or you are eliminated, if this card is in your hand: You earn 2 fewer experience.

When you deal damage to an enemy in excess of its remaining health: Discard this card from your hand.

Daarken
Return to the Path to Carcosa #11. 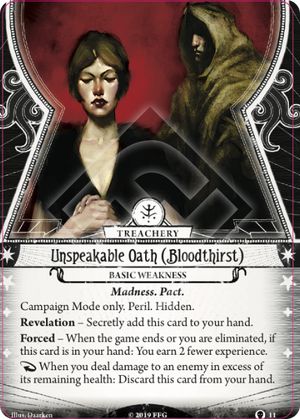 By far my least favorite weakness in the entire game. The premise seems interesting enough, but it's the most frustrating thing this game has to offer. If I remember correctly you draw your weakness after you build your deck specifically so you can't build a deck around your weakness. If you're playing something like a guardian it's fine, but t's the second time in the last 5 or so decks I've made that I've drawn this card and have literally no way to deal with this weakness. If I don't have a card in my deck that does at least 2 damage (say almost any level 0 seeker deck) then you're out of luck. The worst part? the card isn't even interesting, all it does is give me a flat 2 experience drain that serves no purpose except to prevent me from actually getting a card that might be able to deal with this stupid weakness.