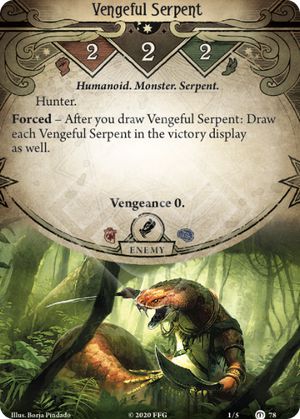 Ugh. That Guy Ugh. These guys. Not too terrible individually (although they do eat up actions, ammunition, and charges, and they hit harder than one would like), they get really annoying as they pile out of the Victory Display like, well, angry serpent people. By the end of the scenario, you will feel very vengeful yourself, although, at least when the last one has been put away, you know they won't pop out of the Encounter Deck to pester you again. So little is certain in Arkham.