When you play a Tactic or Trick event, exhaust Chuck Fergus: Choose two -

- You get +2 skill value while performing a skill test during the resolution of that event. 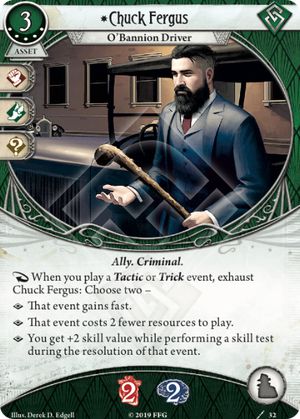 Can we talk about how insane this is?

If ol' Chuck here had been spoiled before the rest of Wini's deck, I probably would have said, "only Tactics and Tricks? Good, but not crazy." However, Wini's deck contains several extremely powerful trick events that you can play repeatedly if you succeed well enough.

Think playing events every turn would get expensive? Think you might not succeed by enough often enough? Chuck literally solves both those problems! And if you're swimming in cash, you can just make an event fast instead! Sure it's once per turn, but that's ridiculous!

How much would you pay for this? Well admittedly much of the price tag is in the xp cost, but the actual price tag is cheaper than Leo de Luca, and if you're playing a fast, free event every turn it's just as much action economy. Unlike Leo, Chuck is much easier to play late in the game, and the both have the same soak.

Event-heavy Rogues coughPrestoncoughSefina will get a ton of use out of Chuck, and could reasonably target him as a priority upgrade. Guardian Tony has access to many interesting tactics, including Clean Them Out and Counterpunch, which would greatly benefit from becoming fast and more accurate. Additionally, Chuck provides a Swift Reload for a mere 1 resource.

Even though he only works once per turn, I'm pretty sure this card is awesome. Can't wait to try it out.

SGPrometheus · 688
Question about discounts. Can i initiate playing a card if i don't have enough ressources but use effects like chuck for discounts? If this works, could be a good combo with dark horse. — Django · 4434 9/1/20
@Django I'm pretty sure someone in the comments for shining trapezohedron said you could, so I think it works. — SGPrometheus · 688 9/1/20
This guy seems like he'll be a very interesting build around. — Zinjanthropus · 213 9/2/20
@zinjanthropus Tony Morgan with the new fight events certainly likes him. Oh, one-two punch fast AND free? Yes thank you. Clean Them Out fast and at 7 fight? I'd love to! He's providing a fast fight action every turn, either for free or at +2 combat. Crazy. — SGPrometheus · 688 9/3/20
Can we also talk about how, while Nathaniel Cho hates the O'Bannions, he would love to Teamwork Chuck over from a Rogue friend? Maybe make sure to pack some "Let Me Handle This!" and Stand Togethers to help sweet talk them into spending 5/10 xp on an ally for you! — Death by Chocolate · 1258 9/3/20
I asked the same thing about costs as a review on Shining Trapezohedron's page but didn't get a clear answer. — Django · 4434 9/3/20
Yeah, guardian has some great tactics, especially since the Nathaniel Cho deck. — Zinjanthropus · 213 9/4/20
Note that you can also turn Dynamite Blast (0) into 4 cost and fast — Zinjanthropus · 213 9/4/20
I definitely want to try out this card next time, I play Sefina. But even thought she has plenty of targets in her main class, I feel a bit sad about: Every class has at least one Trick and one Tactic card in their pool, except Mystics, which has currently neiter! — Susumu · 271 10/10/20
Can you use this for Painted World from Sefina? — Scythe · 1 2/8/22
2

I'm a bit confused over how this card works or not works. When does the trigger for When you play an event actually trigger and resolve?

Under Appendix I: Initiation Sequence it says: When a player wishes to initiate a triggered ability or play a card, that player first declares his or her intent. There are two preliminary confirmations that must be made before the process of initiating an ability or playing a card may begin.

This also comes together with how do you trigger the play of an event here, if you do it with the play action it makes it even illegal to go forward with it as a fast action as stated both under fast action and play action. Under play action it says: Cards with the "fast" keyword are not played by using this action (see "Fast" on page 11). And under fast: Fast Fast is a keyword ability. A fast card does not cost an action to be played and is not played using the "Play" action.

So I can see this card being either too generous, very clumsy or just mechanically broken depending on how and when, when you play triggers the trigger?

iro · 5
It's a 5xp card that you have to find and get into play and that takes a valuable slot; I don't think there's a way for it to be "too generous." I've been playing it in that mode, allowing me to play tactics and tricks during any free window. It doesn't feel broken; in fact, Leo de Luca frequently feels more useful, but perhaps I'm just not abusing any degenerate combos. — SGPrometheus · 688 9/21/20
I can agree with you there, paying 10 XP for two, and barely an upgrade over Luca. I just like when rules are clear, and from the rules I can find this is sadly very unclear, but I guess the card will be in the next FAQ. — iro · 5 9/21/20
The wording is the same as Fence so I don't see how that is problematic, (From the FAQs for that card: "[it] gives the card fast before it is actually played, so this is taken into account during its initiation sequence"). More problematic is that unlike fast assets, fast events can only be played at specific timing points specified on the card which are not specified on events that gain fast via Chuck. — pneuma08 · 26 9/21/20
From other cards that have been around a while (Fence, the Service assets) it's pretty clear that "when you play an event" means immediately upon declaring your intent, before checking restrictions or determining cost (which would align with the definition of "when" if you consider those two things to be part of the impact of playing an event). The lack of a timing instruction on the Fast ability it grants is a bit of an issue, but I think it's a sensible enough solution to treat it as though it read "That event gains 'Fast. Play during any player window.'" — Thatwasademo · 44 9/25/20
My question is how does this work with Double Double? Do both the first event and its copy gain the traits? — Mrehjiwurth · 1 3/20/21
We've been playing it as though it doesn't give the boosts to the second play, simply because Chuck says "when" and DD says "after", so it's a separate play. I'm not 100% sure this is how it works but it makes sense to me. — axefby · 1 4/10/21
2

If you're interested in a handy list of Rogue cards that may benefit from this bad boy — here you go: arkhamdb.com

If your investigator is not limited by Rogue cardpool — delete "f:Rogue" from search input and hit Enter.