You choose the investigator order during the mythos phase.

When you look at 1 or more cards from the encounter deck: Look at 1 additional card and choose 1 non-Elite card among them. Either discard it, put it on top of the encounter deck, or place it facedown beneath Gloria Goldberg (max 3 cards beneath her).

effect: +1. Look at the top card of the encounter deck. 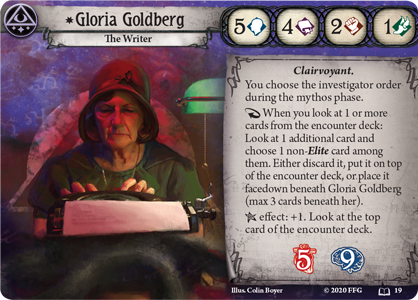 Deckbuilding Requirements (do not count toward deck size): 3 copies of Psychic Sensitivity, 3 copies of Prophecy of the End (shuffled into the encounter deck), 1 random basic weakness.

Nightmares and apocalyptic visions have plagued novelist Gloria Goldberg her entire life. Although she learned to exorcise her terrors onto the page, she has never revealed the inspiration for her weird tales, not even to fellow author Jamie Galbraith. One day, she is struck by a vision of Jamie begging her to help finish what he started. Moments later, she receives word of his sudden death. As Gloria reads Jamie's unfinished book, the story takes hold of her, and the words on the page begin to bleed into reality.
__Deck Building
Search for cards usable by this investigator
Reviews
10

I'm just gonna say it. Gloria is the strongest solo investigator in the game and it's not even close.

This may seem like a bold statement, but it really, really isn't. Her ability to transform the encounter deck into a toothless husk is just so unbelievably powerful that it makes most scenarios an absolute breeze, even on higher difficulty levels.

Why is this so?

It's generally regarded that enemies are the worst cards to draw from the encounter deck. They are not only significant action sinks when playing solo, but you have to deal with them in some way, since the threat of attacks of opportunity often prevent you from doing the things you need to do in order to advance the scenario, and hunters will hound you mercilessly until you dispatch them. So...it follows that if you could somehow play the game without ever drawing enemies, it would naturally become substantially easier. Of course, treacheries can also be nasty with those pesky willpower tests.

Gosh, wouldn't it be amazing if we had an investigator who could singlehandedly address both of these issues?

Gloria's ability allows you to look at an extra card from the encounter deck and then decide what what to do with one of the cards you've looked at. There are currently only a handful of cards that let you peek at the encounter deck, but there are two standouts that can effectively neutralize the encounter deck right on turn 1 for 0 XP.

Alyssa Graham, when used in combination with Gloria's ability, lets you look at the top two cards of the encounter deck. If one of them is an enemy, you just banish it to the discard pile. And you can do this, actionlessly, every single turn. With only a bit of good luck, you can complete scenarios without ever drawing a single enemy. It's a truly magicial feeling.

Alyssa is the real powerhouse, but If you can't get her out on turn 1, Scroll of Secrets lets you peek at the bottom two cards of the encounter deck and choose one of them to move to the top. Pick one with a low-to-mid difficulty willpower test and breathe a sign of relief knowing that the next mythos phase will be a cakewalk. Granted, you can only do this three times before you run out of secrets, but that gives you a bit of extra time to coax Alyssa out of your deck.

Now of course, nothing is foolproof in Arkham and even the best-laid plans fall through from time to time. At some point, you'll get unlucky and you'll find two enemies in a row on the top of the deck, or the act or agenda will force an enemy upon you. And this would be a real problem if Gloria didn't have access to all of the Mystic class' outstanding contingencies. You'll likely be packing Shrivelling or Azure Flame for boss fights anyway, but strong one-off effects like Spectral Razor and Ethereal Form provide great escape valves for when things don't go your way. I'd be remiss not to mention Sword Cane as well. Heavens to Dagon, that is one handy doodad.

And then there's that statline. As if it weren't enough to perpetually be one step ahead of the mythos, Gloria is only the second investigator so far (besides Norman) to have both a 5 and a 4 in her line. With her 5, she has great defense against all those treacheries you'll be drawing. And of course, as a mystic, she can leverage the stat to do whatever you need it to do on the proactive side. But with a 4 as a backup, you've got a great act-advancing tool right from the get-go, without having to rely on cards like Sixth Sense. Wait a minute, Alyssa also gives you +1 intellect boost? Great sizzling synergies!

Gloria's and are useless, but you'll be forced to test them so rarely, that it almost doesn't even matter.

We don't know what Gloria's signature cards are yet, so let's take a look at her replacements. Ruth Westmacott is a pretty terrible ally for solo, but is decent at higher player counts as Gloria's encounter mitigation shifts away from avoiding treacheries to helping her teammates deal with them more directly. With that said, in order to put Ruth to good use, you have to have her in play AND have placed cards underneath Gloria AND then you need to find a pair of traits to match. This feels like a lot of moving parts to coordinate and honestly I'm not sure it's better than Alyssa, even if only for her intellect boost. In addition, in scenarios with certain treachery cards, you are going to want to keep them buried under Gloria until the end of the scenario, further limiting Ruth's effectiveness.

Liber Omnium Finium is a hilariously mild weakness. If you don't ever place cards beneath Gloria, you can essentially ignore it, although you will keep drawing it over and over again. This can be a bit of an annoyance, as Gloria doesn't have the best card draw, and likes to keep her hand filled with all those mystic panic buttons. Perhaps a better plan is to find a weenie treachery to stash away. This way, you can get rid of Liber Omnium Finium for good, and only need to pass a mid-difficulty skill test. PRO TIP: if this card is still looming, don't place enemies under Gloria!

What about multiplayer? With two players, Gloria's encounter management is still very strong and can still be enough to avoid enemies altogether, especially if you can get both Alyssa and Scroll of Secrets on the board. At the same time, if your partner is someone like Zoey Samaras or Tony Morgan, maybe you don't mind sending a juicy VP enemy their way. At three and four players, Gloria's ability is still helpful, but I think she starts to feel more like a run-of-the-mill flex mystic. But whereas some strong solo investigators really drop in power in large groups, Gloria will never be dead weight on the team.

Finally, we should take a quick look at Gloria's options for her secondary class. The short answer is...it frankly doesn't matter too much, since most of the cards you probably want to pack are already mystic cards. Resource economy is always good with Gloria (and all Mystics, really), so money cards like Crack the Case and "Watch this!" are solid adds. I've found that in solo, Gloria is already so action-efficient that normally great time-savers like Working a Hunch and Shortcut are of speculative value. Gloria also likes extra card draw, so anything that helps on that front is a welcome bonus, although you can get a lot of what you need from the neutral skills. Of the three options, Rogue is probably the worst as so many of the events and skills are - focused. That's not going to stop me from bringing a green Gloria through my next campaign though.

I think that once people discover how astonishingly strong Gloria is for solo, we are going to start hearing the loaded terms "broken!" "cheating!" "taboo!" pop up in conversations surrounding her playstyle. I don't really think this is fair. Gloria's ability is thematically a masterstroke (of course she doesn't run into enemies, she already knows where they all are), and while powerful, doesn't make the game feel un-fun or rote. If solo isn't your thing, she is definitely well-balanced for group play. But if you've been frustrated by the swingy-ness of true solo, give the writer a try. You might find that it's actually not hopeless after all.

bricklebrite · 264
Small nitpick, Harvey also has a similar stat line. — Cpt_nice · 23 12/8/20
Gloria is obviously tops in solo. It’s nice to see a game with an elderly Jewish woman protagonist, let alone one who’s OP. But there are a few campaigns where you absolutely must pass strength and dexterity checks with regularity, and without promise of power, that’s simply not happening for her. It seems TIC like TCU is trying to provide multiple stat dependencies. Still, you make some very good points, and while I thought blue was a good fit because it also lets you deal with the encounter deck, yellow solo seems like a perfectly good fit. — MrGoldbee · 1006 12/8/20
@Cpt_nice: Ah I forgot about Harvey and I just used him! — bricklebrite · 264 12/8/20
@MrGoldbee: I haven't dug into TIC yet, but you're right about TCU, which admittedly I haven't taken her through yet. Promise of Power seems like a good add. — bricklebrite · 264 12/8/20
To help deal with the Fight and Agility checks, in addition to Promise of Power she can run multi-wild cards from her off-class, if it's Guardian or Seeker, namely Take the Initiative or Inquiring Mind. For Fight tests in particular, Guardian has plenty more options. — Yenreb · 9 12/9/20