Family Inheritance
A Windfall? Or a Burden?

: Move all resources from this card to your resource pool.

Forced - When your turn begins: Place 4 resources (from the token pool) on this card. Resources on this card may be spent as if they were in your resource pool. Discard all resources from this card at the end of your turn. 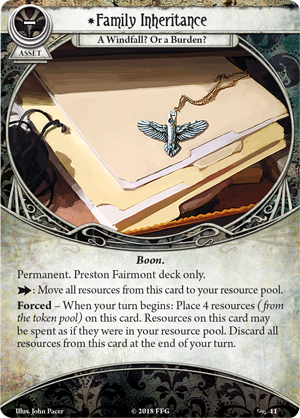 I'm surprised nobody's written a review of this card. I suppose that's because we're all unified on our thoughts on it: it's... well, it's really fucking good.

Oh right, there's a 200 character limit. Let's talk about why it's so good.

Decks need resources. Whether that translates to literal cash or lines of communication to whatever you think resources are, you need them to play your shit. And while the rest of the group is starting with five, our good friend Preston here essentially starts with NINE - enough to pay for even the stingiest of friends to help out on turn one without wasting an action making a buck. And that's just the tip of the iceberg, since you have those four resources available to you EVERY TURN, to do whatever you want with - none of those silly type restrictions like the triple class EotE cards have. Wanna take all of them on your last action and hoard your cash for later? Go ahead. Wanna live the poor life while still feeding your hobbies from behind the scenes? You betcha. Late on payments? A trifle.

supertoasty · 32
It is actually five resources every turn after the 1st round due to Preston's ability. His ability is also why this card can be "a burden" because you can't play resource cards and hoard money if you don't have the actions to use them or take them off. I feel like people haven't reviewed this card because it's so central to playing Preston. Regardless, I agree that it's a very good signature in a class that generates actions.10/10, would hide my money from the IRS and Cthulhu in an offshore account again. — Tay5967 · 15 3/30/22
I guess no one had reviewed this card yet since they'll review Preston instead. It's basically his ability. — Nenananas · 222 3/31/22
Tay5967, Preston's ability doesn't catch resources from upkeep. (or basic resource actions, for that matter) — Thatwasademo · 44 3/31/22