Mythos
Act. Stage 2
Clues: 2.
Dr. Morgan is somewhere in the private section of the club, where only VIPs and the club's managers are allowed. If you are to find him, you're going to have to sneak or even fight your way in.

Objective - Only investigators in the VIP Area may spend the requisite number of clues, as a group, to advance. 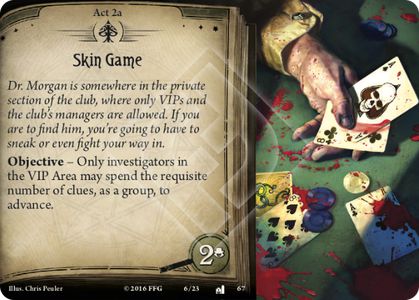 If the players have not yet completed Extracurricular Activity:

You find Dr. Morgan gambling in one of the VIP rooms... but he appears to be playing cards with two unconscious bodies, his pupils dilated as though in a trance. He can't seem to stop laughing, smiling, and chatting with the other "players."

Put the set-aside Dr. Morgan into play in the VIP Area. Advance to Act 3a - "All In."If the players have completed Extracurricular Activity:

The VIP rooms are filled with the mangled and bloody bodies of unfortunate patrons. There doesn't appear to be any trace of Dr. Morgan. You hear screaming and gunfire from the main area of the club. 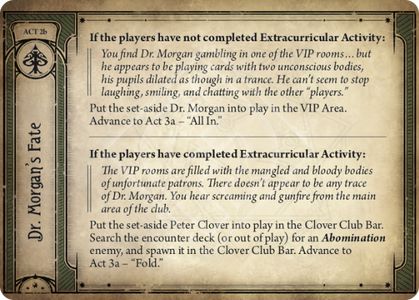