Mythos
Act. Stage 1
Clues: 4.
You need to find Dr. Morgan. The club is packed; perhaps somebody knows where he is.

When you reveal a chaos token: You may treat that token as if it were any other token in the chaos bag. If you do, remember that you have "cheated." (Group limit once per round.)

Objective - When the investigators have collected the requisite number of clues, they must immediately spend them and advance.

Act
After speaking to a number of gamblers and servers, it seems as though Dr. Morgan has had quite the run lately. Instead of cashing out his winnings, he was convinced to double down. He was last seen entering the guarded hall near the back of the cardroom.

If it is Agenda 1, discard cards from the top of the encounter deck until a Criminal enemy is discarded, and spawn that enemy in the Darkened Hall. 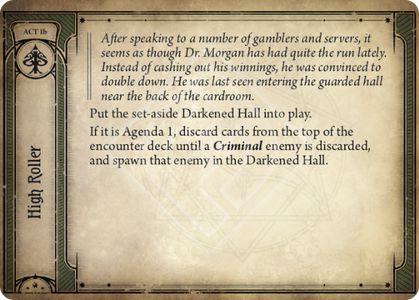