During your turn, if you are not engaged with any enemies, exhaust Pathfinder: Move to a connecting location. 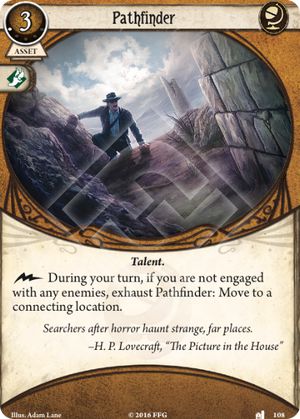 This card is generally considered a great card. For almost any deck that can take it, this is one of the first upgrades you can take. It is quite expensive, but it basically gives you a free action/move per turn. When compared to Leo De Luca, its cheaper but less flexible and will not soak damage/horror. But considering that most turns you will be moving, its not really that much less flexible than Leo. For that reason, this is a pretty good card.

But any of these asset type cards have the same drawback, and that's that they aren't worth as much in do or die situations or near the end of the game. If the game is going to be over in 1 or 2 turns, it'd actually be difficult to get value out of Pathfinder. So pathfinder is a value card, but interestingly enough, in Arkham Horror TCG, at the end of the scenario you need tempo rather than value.

randplaty · 28
Another point in Pathfinder's favor when compared to Leo is that Pathfinder doesn't take up any slots whereas Leo goes in the ally slot, which may well be the most highly contested one. — TheNameWasTaken · 3 6/19/17
It is also not a move action which can avoid some effects which hurt your move action. It is extremely good in Solo decks, where you need to move a lot more often. — Kamalisk · 120 6/22/17
Been told I could have two pathfinders out and use both ef them, so 2 free Actions - is that correct? Seems super OP. — Late · 1 7/11/17
The only rule barring the play of a card is if it is Unique and one is already in play. Pathfinder isn't, so no problem here. — crayok · 1 7/21/17