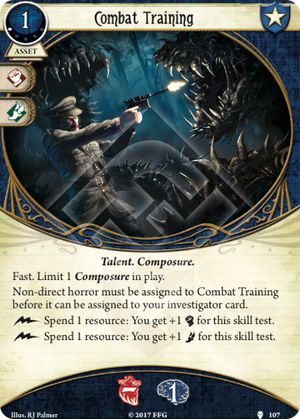 I find that use is a bit too conditional, but then again so are the new "composure" cards.

The 1 horror shield perk is not terrible but guardians have better ways to shield/prevent/heal horror. The 1 exp cost makes it inferior for this use.

A rich Zoey might benefit from it under certain cicumstances but it's a bit of a head scratcher for Mark and Roland who are not usually resource-plenty. But even with Zoey, and it likely won't survive too long in your play area for you to benefit from it consistently. Mark can use Sophie to buff himself far more reliably and without resource cost.

The fast trait and cheap cost are the evident advantages compared to Physical Training if you're hoping to buff your combat skill. No willpower option however, for which a buff is always handy.

Also, correct me if I'm wrong, assets can only be played during your turn, so you cannot surprise-buff your agility for an encounter card agility test (because when are you buffing your combat during Mythos anyhow?) That means you need to have it played beforehand, adding more to its chances of a premature break.

The slot in your deck is probably better spent on other cards. Likely you'll just commit it than spend two resources to play and trigger.