Engage actions you perform do not provoke attacks of opportunity.

: Fight. You get +X for this attack. X is the number of enemies engaged with you.

It’s seen more violence than most people see in a lifetime.
John Pacer
The Unspeakable Oath #147. 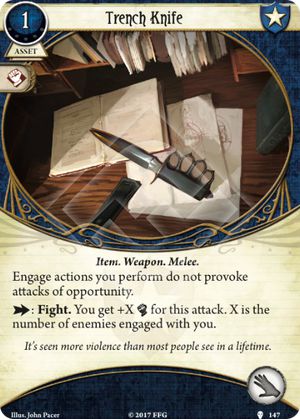 Such a weird card.

Please, just ignore the Fight text, it's garbage. if you want a weapon then grab a Knife, it's MUCH better than this thing.

The real reason you grab Trench Knife is that text about engagement. Sadly for Trench Knife, this is nowhere near useful enough to warrant a card and the actions to play and use it. Taunt exists and performs this little niche far-far better.

One under-appreciated aspect of this card is that it gives you some seriously good bonus against swarming enemies in the Dream-Eaters campaign, so it can work as a very cheap off-hand weapon alongside your primary extra-damage weapon.

snacc · 774
I wouldn’t say it’s under appreciated. Most swarming enemies have very low combat values such that it’s better (as is always the case) to simply lay down the damage with something that hits harder and move on in a speedy fashion. — LaRoix · 1580 9/17/21
1

Investigators who have problem with resources can make a use of it in a multiplayer game. Roland or Harrigan can put it in a 0 xp deck when they start a campaign. Τhe thing is that you dont want to be overwhelmed by enemies so usually the maximum will be +1+2 for the attack. Don't get me wrong but you want to deal with the enemy as fast as you so the Knife from core is better option than this one with the discard option.

Uncle George the Farmer · 23693
This card might warrant an include in a Zoey deck. — FractalMind · 33 12/18/17
Personally, I don't like this card. For a 0XP defender deck, I prioritize weapons that give you additional damage. Killing monsters too slowly can lead to you being overwhelmed. Hence, I tend to favor the .32 Colt, .45 Automatic, and the Machete. — EdgeSeeker · 7 12/21/17
This card is not useful because <a href="/card/01086" data-hasqtip="0">knife</a> is more useful with damage boost for discarding. <div> This item should be boosted when stay in engaging or triggering action.<div> (From weakest to strongest upgrade) <ol> <li> -1 Fight to enemy when trigger fight <li> -2 Fight to enemy when trigger fight <li> +1 Damage when engaged enemy (once per round) <li> +2 Fight per engaged enemy <li> +1 Damage for each enemy engaged this round <li> +1 Damage for engaging enemy <ol/> — AquaDrehz · 178 7/12/18
I hate that I can't delete comment or review... — AquaDrehz · 178 7/12/18
It's thematically frustrating that a) Mark can't take this (he was literally in the trenches!), and b) it doesn't do the same +1 damage as Knuckledusters when it's visually the same weapon but with a *knife* on the end. That aside, it's only the cost that seems attractive - I don't really get how engaging lots and lots of enemies is helpful, particularly as you'll then have no actions left to attack them with. Unless of course you plan to "See them in hell"...? — mythosmeeple · 398 8/2/18
Ignore previous comment - not sure why I thought Mark can't take it. Still, not an attractive weapon. — mythosmeeple · 398 8/2/18
Multiplayer Zoe can take it for the ability. With Fire Axe in second hand she can manage a sequence of atacks and engagenets to save some of her engagement resouces. — theczarek · 2 11/6/18