Engage any number of enemies at your location.

You steel your nerves and shout into the darkness. "Come and get me!"
John Pacer
The Dunwich Legacy #17. 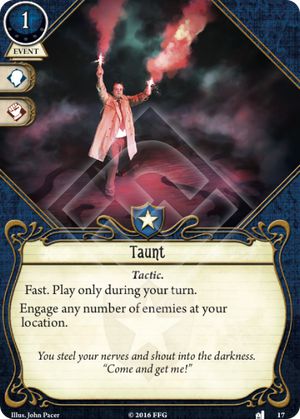 For 1 resource (something you almost always start your turn with one of) you get at least one engage action with this card. This is the lowest value you get for this card and honestly even at that level it is deceptively good.

Here's the thing: not all actions are made the same. Say you have an enemy engaged with your fragile Daisy flower one stop over from you, if the enemy has 2 health and you have a .45 then it takes you three actions to move, engage and kill that enemy no problem. However if the enemy has 3-4 health you're now in trouble. If there are two enemies at 1-2 health you are similarly guaranteed someone has to take damage (unless your daisy has a plan)

With Taunt you now have that action you need to cut through the chaff and save everyone. Wonderful! For 1 banked resource you saved someone 1 damage and 1 horror probably.

Where Taunt breaks the game is if you're a certain nutty chef. As Zoey you can:

And make 2 damn resources for your slaughter.

Does it usually get that efficient? No, but since it's minimal efficiency is trading one resource into an action (which is a good trade) it's never a bad card. As soon as there's two enemies in a location fire away and reap the rewards of action economy!

Difrakt · 1180
You remember you can fight an enemy that is not engaged with you? This screws up your Daisy example unless I misunderstood you. — nierensieb · 1 4/26/17
@nierensieb While that is true, you typically should at least consider that a missed shot with the .45 could put a bullet hole in the very fragile Daisy Walker's body. She can't take much punishment. A missed shot could certainly mean Daisy is suffering from the monster attack now along with the bullet you put in her side. Chance away by all means, but I believe that the point for Daisy is still a valid one. — Bronze · 171 5/1/17
Fair enough. I was just wondering if Difrakt missed the fact he can attack an unengaged enemy. — nierensieb · 1 5/2/17
can confirm. Taunt in a Zoey deck is auto include. It gets even crazier with upgraded taunt. — stetson · 3 9/21/17
This card doesn' deserve to be in my Zoey deck in a two player game. There are rarely enough enemies for this card to prove its worth. Most of the time im following my clue finder around protecting him, and half of the time I will draw the enemy from the encounter deck anyway. There are so much better cards in core+dunwich that this simply clogs the deck. In 2p game I'll pass. — Andronikus · 1 5/20/19
When you play Taunt, you don't just trade action(s) for resource. You trade action(s) for resource AND A CARD, which is significant difference. If you only need just 1 engage, you are better off not playing Taunt. — Deo · 1 8/29/19
4

Does this card have a place in a deck that isn't Zoey's? Yes, in one very specific case, which I'll get to in the last paragraph:

Taunt shares a theme with certain other fast cards; Shortcut, Working a Hunch, and Sleight of Hand, come to mind. Cards that involve a fast version of a basic action that any investigator can do, such as moving, discovering a clue, playing an item card, or engaging an enemy, as the above examples provide.

Thing is, some basic actions are more valuable, and needed more often, than others. Take the humble move action; every investigator is going to be moving between locations, in every scenario, from start to finish, regardless of class, role, or objective. It guarantees the usefulness of Shortcut, made even better when it's use can be applied to any investigator at your location, nor just the card holder. Same with discovering a clue, same with playing a item asset.

Engaging an enemy just isn't one of those actions. For an engage action to be taken, there must be an enemy at your location that's either exhausted, or engaged with another player. Even then, only the latter really calls for an engage action to be taken, and EVEN THEN it's completely optional, as all engagement does is eliminate the risk of the other investigator taking damage, either by your hand, or the enemy's. It makes justifying a card slot solely to be able to taunt faster very difficult, as it doesn't actually help perform a guardian's primary role, and non-guardians will be more likely to want to AVOID enemies, not Taunt them. So then why, other than being Zoey Samaras, would you want to include Taunt in your deck?:

Lucaxiom · 3547
How many players there are in your party probably makes a difference. I ran this with Zoey and one other investigator and I never used it and swapped it out after a few missions. Four players though means more enemies, so maybe more useful? Also, being Fast means you avoid an attack of opportunity engaging a monster when you're already engaged (I think that's right?) which can be helpful. However, I don't think either of those really change much, and I agree that this card generally just doesn't cut it. — Octo · 81 11/22/19
Well, sometimes if you engage an enemy, it does more then just eliminating the risk of the other investigator taking damage. If you swing machete, it's +1 damage for every attack. Sometimes you just need the action to engage to kill the enemy and can't do it without Taunt. Of course you don't see machete as much as before taboo... Another thing is, if you are not sure, whether you are able to kill the enemy with your, let's say, last action, then engaging the enemy will also enable your seeker to use his/her turn instead of having to run away and fail with it. So I think it really depends on your group composition. — trazoM · 9 11/22/19
Small remark: one case of use was forgotten: aloof enemies. So in some scenarios, taunt is quite useful tanks to that — MoiMagnus · 62 11/22/19