You know this town like the back of your hand.
Derk Venneman
The Dunwich Legacy #22. 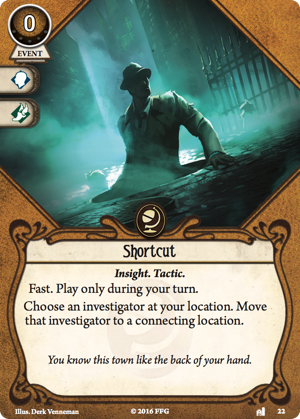 Shortcut is a beautiful, simple card that flies somewhat under many people's radars. It's fast, which means it doesn't cost an action to play, and allows an investigator to move. What's special about that? At first glance, very little. Therein lies the beauty of the card.

The fact it's fast means it doesn't trigger Attacks of Opportunity if you're engaged with an enemy. Want to move and drag an enemy with you, to where your better-armed buddies are ready to support you? This is the card for you. Or want to push another investigator ahead of you into a location in which enemies wait, so that they engage him and not you? Again, shortcut offers that option, and it's at a zero-cost, actions and resources both.

Strikingly, its two traits, insight and tactic, reveal something of the utility of the card. If you have an understanding of Arkham Horror and want to think tactically, you'll soon see that flexible options to respond to a host of situations become vital in any well-built investigator's deck. Being able to save an action to move at a crucial moment can make the difference between success and failure. There are other great movement cards, such as Bait and Switch, Think on Your Feet and Elusive, but none allow 'pushing' other investigators. Pathfinder is also a premier movement card, a shortcut-on-tap, if you will, but comes with an xp-cost and a stipulation (no enemies engaged with you).

I will always consider Shortcut for any investigator that can take it, including the five Dunwich investigators, as it provides such options. Oh, and the icons aren't bad either!

zozo · 1933
Yup, diamond in the rough this one. I discovered it when building my 'zoey samaras: the stabbing Chef' deck. Definatly one of the most important card in there, free movement So she can unload with full 3 or 4 actions worth of damage. — Heyenzzz · 3212 4/2/17
it's such a good card. The ability to "buy" an extra move with your deckslots is a trade I'll make any day. All the investigate power and combat prowess in the world wont help you if you run out of time, this card is just that, extra time! — Tsuruki23 · 1726 6/17/18
I wonder if Nate and Matt fought over which class this should belong to. I can see how it's Seeker, but it feels very Rogue-ish to me. — ArkhamArkhanist · 4 9/1/18
Shortcut is a good way to trigger Fieldwork for +2 to any skill test. — Zinjanthropus · 155 3/9/20