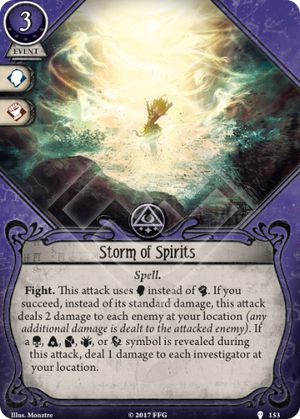 This is a very strong spell for mystics in multiplayer games and the more people you are playing with, the stronger it becomes. It is similar to Dynamite Blast except that it only deals 2 damage and requires you to succeed at a Fight test, though you can choose the weakest enemy at your location to fight. Those drawbacks are balanced out by the fact that it costs 2 less resources and is in a class that is substantially more likely to have spare resources to play it. Additionally, it synergizes with other popular mystic cards such as Arcane Initiate and Uncage the Soul. Finally, and possibly most importantly, it is much easier to arrange multiple enemies at a location that contains investigators than an empty one where Dynamite won't hurt your fellow players.

Storm of Spirits is especially good in Sefina Rousseau decks, where it is possible to play Storm of Spirits two, or even three times in a single turn, clearing a location of even tough enemies. And for the truly bold, it can be combined with Double or Nothing though I haven't personally tried this combo yet.

menionleah · 68
Note that playing Uncage the Soul to pay for Storm of Spirits would trigger an Attack of Opportunity from each ready enemy engaged with you. 0-level Uncage the Soul isn't as useful as it may seem. (See my review of it.) Though, if an experienced version with Fast gets released down the road... — Herumen · 1615 12/7/17
Storm of Spirits + Double or Nothing is fantastic. Highly recommended. — Katsue · 8 7/14/18
Although Sefina would need to be built to take the potential damage..... — TheDoc37 · 455 11/9/20
6

This is one of those really cool trump-cards that may or may not blow a scenario out of the water. It's obviously more likely to pull its weight with more players and more pulls from the deck, but even in two player the card is warranted as a way to clear two or three foes at once.

A few factors in this card's great strength:

So, why then does not every deck have 2 copies? Because it's extremely expensive that's why! Obviously a card capable of hitting as many foes as Shrivelling has charges is going to be very expensive. Playing this card will prevent you from utilizing Arcane Studies, slow down the rate at which you play Spirit Athame, Holy Rosary, St. Hubert's Key and so on and on.

So, to play this card, make sure you're accounting for the cost, and if you can't then just leave it well enough alone. Also, avoid in solo, playing Storm of Spirits against a single target isnt terrible, but the severely reduced chance of multiple hits in solo reduces the value of this card drastically.

Tsuruki23 · 2119
Definitely a card that is much stronger on lower levels. Although it helps that you can target the lowest-fight enemy, it's still very difficult for someone like Sefina to make this card connect on Expert. But on Easy/Standard, it's pretty great. — CaiusDrewart · 2555 6/21/18
What is the consensus on the timing if you play this then #Shortcut to avoid the damage to self. — Drakkhen · 8 7/5/21