Deal 2 damage to an enemy not engaged with you at your location. 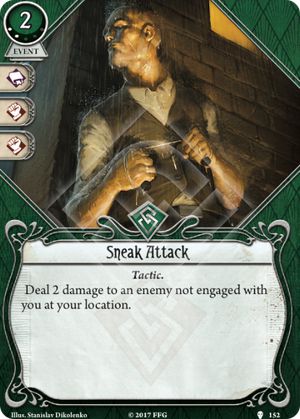 This old staple still doesn't have a review?

Testless damage is always good, and this one is a huge upgrade. While Sneak Attack (0) requires you to pass an evade*, this one doesn't as long as the enemy is engaged on someone else. That saves you a test and an action most of the time. Two testless damage that can hit aloof enemies is excellent. Chuck Fergus makes it fast and allows it to be used on other players turns, too. An auto-include in any Chuck deck and a generally strong event that Sefina Rousseau usually wants.

When it comes to contributing to fights, I've always felt it appropriate that this and Backstab are so much stronger than any of the rogue guns. That's how a Rogue's supposed to fight, after all — not head on, but sneaking in a punch while the 's got them distracted. Save your hands for picking locks and strange gizmos, don't try to be a worse guardian!*

* unless you use it in the player window after enemy attacks with Chuck Fergus.

** unless you're Tony, in which case you're actually secretly a Guardian

suika · 8839
Very good summary, but with one caveat: baring aloof enemies, it does nothing compared to the level 0 version in solo play. It is still not a strictly multiplayer card (like "Stand Together" or "Safeguard" would be). I did purchase it in my solo Carcosa run with Sefina (and Chuck), and it was indeed good for getting more than half of my tally marks "Chasing the Stranger" (combined with "Coup de Grâce"), but the second copy lacked usefulness compared to the level 0 version, even there. I would still consider it in any solo Carcosa run, in particular with characters not great in fighting, but certainly not in other campaigns. — Susumu · 271 10/4/21
I'm also not sure, if you can play it out of your turn with Chuck (except for with "Quick Thinking" and similar effects). His ability reads: "When you play an event...", this does not sound, like it allows you to play an event, you normally could not play. — Susumu · 271 10/4/21
Chuck absolutely can play events out of turn. Fast events are played during player windows and cannot be played as a normal action. Therefore, his ability must allow you to play events during a player window. It would not make sense to say that you take an action to play, then trigger Chuck's ability to somehow retroactively play an event in the player window before your action. — suika · 8839 10/4/21
The caveat I have is in "Appendix I: Initiation Sequence": to play a card, you first have to check, if it can be played, then pay it's cost, then (in step 3) actually play it. If any condition does not aply, the sequence is aborted before reaching step 3. The wording of Chuck sounds to me, like it would trigger in step 3. An event, which is not fast could normally, without Chuck, not be played out of turn. So therefore, the sequence could be abortet, before Chuck makes it "playable". Not 100% sure, but that's, how I would read it. — Susumu · 271 10/4/21
It's a minor thing, though. Even without the option to play it out of turn, "Sneak Attack" (2) wirh Chuck is bonkers good! — Susumu · 271 10/4/21
The problem is if Chuck works as if you described, the initiation would be aborted immediately after Chuck makes the card fast because you are now attempting to play a Fast event as an action during 2.2.1, which is actually not allowed. So it cannot work in thee manner you described. — suika · 8839 10/4/21
Besides, via the FAQ from Fence: Q: With Fence, can I play an Illicit asset (or appropriate event, such as Pay Day) in the [player window] after my last action? This seems a bit more prickly as I need to initiate a play action before I can give fast to the card... But then also fast cards don't use the play Action to enter play? A: Yes, you can. Fast assets can be played in any player window during your turn, including the one after your last action is taken. Fence gives the card fast before it is actually played, so this is taken into account during its initiation sequence. — suika · 8839 10/4/21
I wouldn't say, that it would be otherwise unplayable with Chuck. He would "need" the action in advance, but would not spend it with the event becoming fast. Regardless, the Fence F.A.Q. is a good catch! It shows, that "When you play..." actually triggers before playing a card. — Susumu · 271 10/4/21