Fast. Play when you activate the Fight ability on a Firearm or Ranged asset.

This attack can target an enemy at a connecting location. Ignore the aloof and retaliate keywords for this attack. If this attack succeeds against an enemy not engaged with you, the attack deals +1 damage. 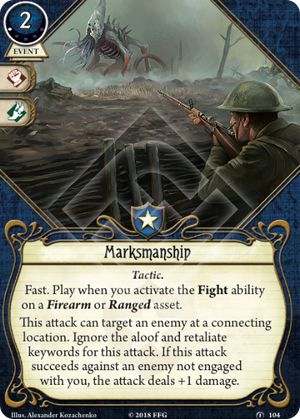 An extremely fun and exciting addition to the game.

This card is kind of similar to Vicious Blow, in that it allows one of your attacks to deal +1 damage, provided that the attack hits. A very strong effect.

To flesh out the comparison a bit more:

--Marksmanship only works on Firearms or Ranged weapons;

--Marksmanship can't grant bonus damage against enemies engaged to you.

--Marksmanship can target enemies one space away, which is very nice and can often save you an action;

--Marksmanship ignores Aloof and Retaliate. In this case I don't think avoiding Retaliate is that significant. You probably wanted to heavily boost your Marksmanship attack anyway, such that your odds of hitting were very high; this means Retaliate is not a huge concern. (And of course some targets won't have this keyword anyway.) Avoiding Aloof is a nice action-saver when it comes up. But this is going to be relatively uncommon because not many enemies both have this keyword and are reasonable targets for Marksmanship. (It's a bit of a waste to snipe a Whippoorwill).

On the whole, I think Vicious Blow is the stronger card; its advantages will basically always be helpful. Marksmanship's advantages are much more situational, requiring specific enemy keywords and specific enemy placement, which you may or may not encounter in any given scenario.

With that said, Marksmanship is still a very welcome addition to the Guardian class and something I will gladly run in addition to Vicious Blow. +1 damage is extremely powerful. (This will be obvious to any veteran of Arkham Horror LCG, but if you want an explanation of why +1 damage is so good, read my review of Vicious Blow.) So Marksmanship will be well worth running, provided that you have a lot of Firearms in your deck. Ideally, these will be really strong firearms like Lightning Gun, because that increases the chance you can get maximum value from Marksmanship by sniping a powerful enemy one location away in only one shot. (The generous to-hit bonus on something like Lightning Gun or Shotgun will also reduce the chance that you miss and waste the card; this is particularly welcome since Marksmanship itself does not help your attack hit.)

CaiusDrewart · 2816
The +1 damage is just a side effect, not the main reason to pick the card, and Vicious Blow is not what this should be compared to. The connecting location thing (and possibly ignoring aloof) is the main thing this card does. It saves you one to three actions (one for hitting an aloof enemy in your location, two for hitting an enemy in a connecting location you didn't want to go to, three for the same plus an aloof target). — TheNameWasTaken · 3 6/21/18
@TheNameWasTaken: I simply don't agree. There is a lot of text on this card, doing a lot of different things, and I think it's easy to lose sight of what matters. But the only two really important effects are 1) the extra damage and 2) the connecting location part. While it is true that the connecting location is effect is more unique, in many ways it's less important than the +1 damage. All in all, I think Vicious Blow is certainly a fair comparison. I also just don't think the Aloof aspect is that important. Large, threatening Aloof enemies that would make good targets for this card are few and far between. — CaiusDrewart · 2816 6/22/18
I agree with you, Caius. (Also, I really like your reviews. They're to the point, informative and well written. Keep up the good work. :) ) — olahren · 2502 6/22/18
In carcosa compain u ll have a target for aloof saving action part as well as connecting location — Fullgrimm · 1 9/25/18
Another (very minor) upside over vicious blow is that marksmanship is usable with the ornate bow - which vicious blow isn’t due to it being an agility check. — Death by Chocolate · 1258 9/27/18
I like the combination of this with Think on Your Feet, particularly with the Ornate Bow. Get a free move, then take out a 4-health enemy. I saw this in a Skids Decklist. — Zinjanthropus · 213 6/2/20
4

Cool and fun card. Whip out a ranged weapon and snipe something, its a cool card in idea and practice. it's just not very good.

This is what the card does:

You get quite a bit of cool stuff, so that would make it seem like a good card right? 2 saved moves is EASILY worth 2 spent resources. The extra damage. Sounds good? Not quite.

This is a -card-, you gotta draw it, play it, costs money to play and most importantly, it's 1/15th of your deck! characters do not have much luxury in card draw unless their name is Joe Diamond. also struggle with resources.

What I'm getting at is this: Marksmanship is this real cool effect, a timesaver and circumstantial problem solution, doesn't actually do much that you cannot already, no extra accuracy nor grabbing clues or evading or whatever. If Marksmanship isnt immediately helpful, it's a full blown dud! You might draw the enemy yourself, it's engaged with you, a dud! Dealing +1 damage wont let a 2 damage weapon kill a 4 HP enemy, a dud! Maybe you just don't afford it, even if you got the cash you need to save it to pay for the next weapon or ally and the 2 resources will set you back too much, a dud!

So you see how many shades of "dud" the card is? I've toted copies of this cards in my hand in PERFECT scenarios, drawn it even. Rougarou? Miskatonic Museum? Pretty much all of Carcosa? It just isn't helpful enough. In a card game the best decks have as few potential duds as possible.

The literal best-case scenario is to combo Marksmanship with Lightning Gun or M1918 BAR and Stick to the Plan. This way all the combo pieces will be uniquely easy to assemble and play on demand.

Tsuruki23 · 2350
I once run one copy of this card in a Carcosa campaign and bought it particularly for the Man in the Pallid Mask. Bad luck or whatever? I don't know... I just never used it once! Ever since I'm down on this card... — matt88 · 2657 3/19/19
This should have been an asset with an exhaust effect. Even then it’s not so useful that I’d think it much superior to e.g. Pathfinder at a similar price point. Events need to be abusable for more than a couple actions or they need to be so broadly usable that they’re guaranteed efficiency. This card is neither — Difrakt · 1180 3/20/19
clues are static so you can deal with variable solutions. Enemies are variable so you need a reliable and static solution — Django · 4434 3/20/19
2

Firearms get a shot in the arm.

There are a lot of good things to say about Marksmanship. To be concise, this card is an action saver. At its best, it can save you over a turn of actions (MOVE to connecting location, ENGAGE an enemy off an ally/an aloof enemy, FIGHT for 2ish damage and FIGHT to finish off a foe) and at its worst, it saves you two actions, which is still really good.

It is a tactic, so it can be played off of Stick to the Plan, meaning you will always have it in your back pocket.

And really, the only thing that this requires of you is to run guns... which have gotten a lot better thanks to Venturer and Stick to the Plan (with Extra Ammo).

Oddly enough, this card is probably best in Rogue who can double or nothing with this and really put the hurt on a boss, from afar.

A great card, well worth the xp!

Oh and don't be fooled by the art. Don't use this with barricade and the springfield (my heart wants them to be playable!).

Myriad · 1157
Wait a second. Can you activate a Fight ability if there is no enemy at your location?. — Sacrillegal · 1 6/14/18
It is not entirely clear if you can use it to do that at the moment, but my money is on yes. — Myriad · 1157 6/14/18
@sacrillegal Even if the answer is technically no, the correct answer is yes. It's obviously intended for such situations, so I'm playing it that way until Matt Newman says otherwise. Also, both Zoey and Leo are two Guardians who can take DoN, making this very very good for them. I like this card a lot. — SGPrometheus · 688 6/15/18
the support card Springfield wanted.. makes it somewhat useful now, being able to attack from a connecting location with 4 damage — oCCult · 7 6/19/18
Springfield should have bonded a event card like this! — AquaDrehz · 185 12/19/19