Disengage from each enemy engaged with you and move to a revealed location with no enemies. 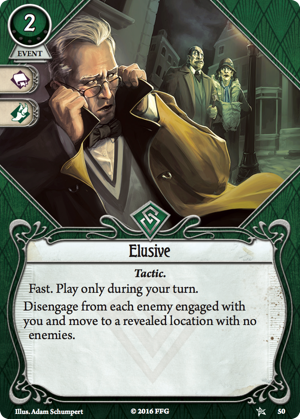 For characters with weaknesses that force them to travel to distant locations (e.g. Searching for Izzie or Smite the Wicked), this card could be invaluable. As the FAQs note, you can move to any revealed location with no enemies - rather than having to move location to location. This can get you to your weakness location - and back again - much more quickly.

AndyB · 842
Though, note that since those weaknesses are attached to the location farthest from you, it's likely you haven't been there yet to reveal it. If so, you wouldn't be able to travel directly to that location. Even so, it can get you there faster and, in general, is a great way to quickly move more than one location away. — Herumen · 1535 1/11/17
8

The other review covers what this card does, but it doesn't communicate how lovely it is. It's fast and lets you pull agro that can save lives. Seriously. A single run of Carnevale of Horrors will make this card shine. I'd love an upgrade that causes exhaustion or reduces cost even further.

dranore · 9
You still did not nail the turbo uber maximum power of this card as it simply wins games :). I just went through core campaing with Skids. It was nuts. First scenario was finished with Elusive + Dynamite + Dynamite, with 3 ghouls eating flame. In 3rd scenario I comboed that with On The Lam to get rid of a whole Main Path Parachute Squad. On The Lam first, then engage them all, drag them to the forest them without a scratch, then Elusive and onto the Main Threat. — Onetribe · 226 1/5/17
Are they not elite enemies?(and therefore not susceptible to on the lam?) — Werewerf · 1 11/22/17
0

It’s hard to tell if this is actually worth two XP. It’s a teleport for free and zero actions that I can get you anywhere except to the boss. But there aren’t a ton of situations where you just want to ignore all your responsibilities and get to the end when that end doesn’t have a resign ability. And if that point, "I’m outta here" is cheaper. As a panic button, it’s pretty great, but for 3XP more, will you eventually get cheat death instead?

MrGoldbee · 1042
I'll push hard on this. Elusive is a much more flexible and useful card than Cheat Death. This protects you in much the same way as Cheat Death, while also acting as an I'm Outta Here if you need it. But really what it does is it saves you tons of actions. You don't have to evade, you don't have to commit cards to a test, you can just go anywhere on the board without spending tons of move actions. Some maps encourage this more than others, but in the right campaign this card is absolutely stellar even with the taboo XP increase. — StyxTBeuford · 12433 3/2/21
Great points! — MrGoldbee · 1042 3/3/21
As a note, sometimes you actually want to ignore all your responsibilities and get to the *BEGINNING*. Zoey, Jenny, and to a lesser extent Tony all have painful weaknesses that involve the farthest location, which on a large map can be otherwise impossible to deal with, even when the investigator's actions aren't needed to complete the act. Also relevant to large maps can be VP locations that the investigators chose to ignore in favor of progressing the scenario, but which they later realize would be safe to clear later on if only an investigator could get there again (mild spoiler for Dream-Eaters: a situation like that can easily occur in Point of No Return). — anaphysik · 21 3/4/21
It is very useful in Campaigns with large maps and side quests, including the signature weakness sidequests meantioned by anaphysik. It can also be useful for "jumping over" enemies you don't want to deal with as well as serving as a super evade. — LivefromBenefitSt · 620 3/4/21
I would say that Elusive is still a bargain at 2xp. I was including it in all my solo Rogue decks, and it was always useful at least once. Eventually I decided that it's too strong to include in Wini decks, but had to backpedal on that when I started trying to do solo Innsmouth. It helps even out the really poor 1p scaling a bit. — Zinjanthropus · 160 3/5/21
0

After re-reading the timing chart I've noticed there is a player window between Hunter enemies moving and enemies making an attack, which means it is possible to make the enemies move and elude them afterwards. This is useful in some scenarios with out-of-the-way locations.

Magnificate · 980
This interaction would be super sweet, but sadly there's this little sentence "Play only during your turn." to prevent this. — Csys · 1 6/30/17
Oh... That's true. Doesn't that also mean you need to have at least one action remaining to play it? — Magnificate · 980 6/30/17
No, you don't need to use an action. It's still a fast card :) — Csys · 1 7/1/17
That's not what I meant. It seems that in the player's turn there's no window after taking actions. So, that means Elusive can be used at the latest between the second and third action. Right? — Magnificate · 980 7/1/17
There is an action window before 2.2.1, and you enter that window before your first action and after each action, including after your last one. You can play Elusive then. — TheNameWasTaken · 3 7/2/17
I'm assuming playing this card provokes attacks of opportunity. You could be taking A LOT of damage prior to getting away? — Gallows · 1 2/12/18
No, you disengage with each enemy engaged with you. — bern1106 · 2 2/13/18
Fast cards do not trigger attacks of opportunity, if I'm not mistaken. — FeyrBert · 1 3/2/18
Playing cards doesn't innately trigger AoOs, spending actions does. While most cards require spending an action to play, fast cards do not — Chitinid · 14 8/6/20