For each point this skill test succeeds by, after it resolves, you may immediately move to a connecting location (to a maximum of 3 times). 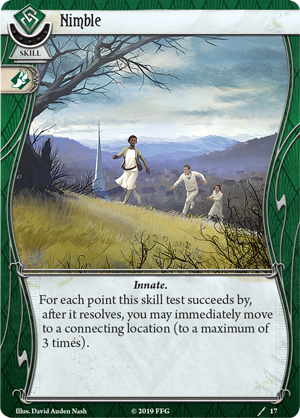 Benefits gained from skill cards are always nice because you never have to commit actions or resources to gain the desired outcome. Cards like Fearless for healing horror, or Quick Thinking for gaining actions. But in theory Nimble potentially provides a whopping 3 free actions! That's insane value, and you're not even paying anything (except the card itself).

So what are the downsides? Firstly it's only valuable if you need the moves. Maybe you still need to gather clues on your current location, or you need to stick around to act as bodyguard. If you don't need to move, then Manual Dexterity is better in every way. Secondly, can you move? The scenario itself could be preventing you from progressing further.

Maybe you'll put it to good use when you evade spoiler and subsequently use the move actions to reach the exit in spoiler. But if you have access to Nimble then you almost certainly have access to Elusive (a fast disengage and teleport), so even the above hypothetical is questionable at best. A very circumstantial card. I predict this card will be most frequently used for a single move action, in which case Quick Thinking is arguably better.

TL;DR - Hard to get maximum value from it, most likely used for 1 free move.

snacc · 876
That's pretty much been my experience with this card. Very good card on the rare occasions when you need it. Ultimately it ended up being too circumstantial to include in any decks, sadly. — Zinjanthropus · 213 6/26/20
I should say on the rare occasions when you need it, nimble is in your hand, and there's an enemy engages with you. — Zinjanthropus · 213 6/26/20
Track shoes is an interesting option for being able to use nimble without an enemy engaged on you — Chitinid · 14 8/4/20
True! That's a good one because it also gives you a free move, so you can move up to 4 times. You can also use it on agility treacheries, which might be interesting. — Zinjanthropus · 213 8/7/20
3

Parallel "Skids" O'Toole might be able to make this pretty effective because he can trigger a 0-difficulty test (during any window) that can have agility icons committed to it. If you really need to move across the map, you could even Double it. It's almost like a mini-Elusive when used this way. or like a super Track Shoes. Could be used with On the Lam (particularly the advanced version) to engage a bunch of enemies and move them somewhere conveniently out of the way. Or to reveal a bunch of locations at once. If a team-mate has Safeguard, you could even bring them along for the ride.

EDIT: Note, also, that Skids can recur this with his , or in some cases tutor it with one of 4 Daredevils. Never take move actions again!

Zinjanthropus · 213
Or YOU take Safeguard with original back and your team-mate commits Nimble to your special ability to drag you around! :) — Death by Chocolate · 1251 8/28/20
3

After a campaign with this in Winnifred I think the card can be a pretty nice addition to a Taboo'd Rogue deck in 3-4 player games assuming you're going to be doing evading with any amount of frequency. Extra actions with low cost are always worth considering, and in the right situation this can save you up to 3 for just the cost of committing a card to a test. While you don't get free reign on what those actions are spent on, move actions are fairly commonplace and if you have this card in your hand for a full scenario there's definitely going to be some situations where it'll do its baseline effect and save you one move action that you were going to spend after evading. In those situations I'd argue that this card is already pretty good. And there'll be some situations where it'll save you 2 or 3 actions, in which case this card is incredible.

Now the effect isn't universally great and there'll be some situations where it'll spend half the scenario sitting in your hand before you get value out of it. As such, I think this is a card I would generally not run more than 1 copy of because drawing 2 when you really don't need the effect can slow you down a bit. But if you're someone who expects to be testing Agility a lot and especially if you're playing with 3-4 players where being able to move to an ally's location has a lot of value, I think you should try running a copy.

Also just want to say that while Quick Thinking is going to generally be better than Nimble, it's one of the best Rouge cards in the game and you're only allowed to run 2 copies of each card. I think there's a lot of decks that are interested in a more situational Quick Thinking-type effect to run in addition to the two copies of Quick Thinking they already have.

Sylvee · 93
I had a nice situation recently, where I was adjacent to the guardian on one location and the wizard of the order on another one. I was able to evade an enemy on my location, succeded by three, and dragged the wizard to the guardian. Now this was very situational great. But in general, I think the possibility to move through enemies and take them somewhere else without AoO can occasionally add extra value to this card. In particular, if you have somebody in the group with cards like "Flamethrower" or "Storm of Spirits". — Susumu · 271 4/28/21
Use it in Mythos in TIC! — MrGoldbee · 1315 4/28/21
A common misconception is that this card only works on evades. It works on any agility test, even in the Mythos phase. I am a huge fan of Nimble. — StyxTBeuford · 12744 4/28/21
(And to be clear: There are cards, like Pilfer and Backstab, that let you test agility in other ways as well) — StyxTBeuford · 12744 4/28/21
This is one of the reasons I liked Sharpshooter in Wini when I played it -- it's really fun to exhaust Sharpshooter and commit Nimble (and probably another card) for (at least) +3 to a fight action then get some free moves immediately afterward. — Thatwasademo · 44 4/29/21
If you are Silas, Wendy, or Preston, or even Ashcan or Jenny, it also works on track show's agility test, which makes for sprinting across the whole map very quickly — NarkasisBroon · 10 4/29/21
Finn can do that as well — StyxTBeuford · 12744 4/30/21
0

I have found (that I was wrong) that this card works pretty well with lockpic. Investigate with with feet and use Nimble to move after successfully clearing the location.

Using it in a Winifred deck with lockpic gave me a Ursula in reverse feel. But as most have pointed out. You rarely use more than one move.

Malakai1234 · 7
Unfortunately, you can't commit Nimble to Lockpicks as it is an Intellect check, not an Agility check. However, I had similar succes as you described with Pilfer. — Nenananas · 223 9/11/20
Sorry to be the spoilsport, but you cannot commit this to a lockpic-check, as you can only commit lore-icons to lore-checks and nimble does not have a lore-icon. — trazoM · 9 9/11/20
Sadly, you can't actually commit agility icons to Lockpicks because it's still a intellect test. Agility is just added to intellect. Otherwise that would make this skill much better than it is. — Zinjanthropus · 213 9/11/20
However, you CAN commit this to a Pilfer or Backstab test, so keep that in mind. — StyxTBeuford · 12744 9/11/20
True, or an agility treachery — Zinjanthropus · 213 9/12/20
Movement doesn't provoke an attack of opportunity correct? — CrabbyTerror8 · 112 10/5/20
It's not a move action just a move effect, so yes it doesn't provoke AoO. — Killbray · 6186 9/30/21