If this skill test is successful by 2 or more, after it resolves, you may immediately take an action as if it were your turn (this action does not count toward the number of actions you can take each turn).

At the end of its ability, this card gains: “(max once per round).” 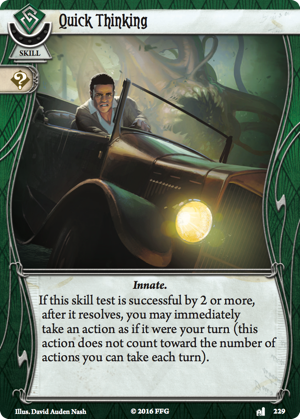 It's been three years since Undimensioned and Unseen came out, and Quick Thinking has had plenty of time to cement itself as a strong piece in the Rogue suite of action efficiency. Let's look at why this card is so great, and where it truly shines.

Assuming the relevant skill test succeeds by 2 or more, you trade one card (Quick Thinking) for an extra action. This is at minimum a fair trade because you can always spend an action to draw a card, and plenty of card effects allow a better rate of card draw, and you get one free every upkeep too. This trade can be powerful though because there are some turns where actions are more valuable than others. Some turns (hopefully not too many!) you idly draw cards waiting for something you can contribute to the Act, and others every single action counts. The extra action can also be literally anything you want. Seekers might not have to risk a skill test to get a free move out of Shortcut, but with Quick Thinking you can also get in an extra attack against an enemy that needs to be defeated before it can hit back, or investigate again to clear a key location before time runs out - literally whatever you need! Quick Thinking is therefore a great way to put yourself one more step ahead of the game.

So far so good, but now we need a skill test we can succeed by 2 or more, and Quick Thinking itself unfortunately doesn't help much with that with only one wild icon; accounting for that, we need a skill test we were already likely to succeed at by at least 1. Notably it can be another investigator's skill test, but you'll probably want ways to reliably produce these skill tests by yourself. Some investigators do great at this already by having high stat values, such as Tony Morgan with 5 combat and the newly spoiled Winifred Habbamock with 5 agility, but the Rogue card pool is also full of cards to grant opportunities for this.

Suggestion and Lockpicks are both low level assets that repeatedly grant you opportunities to take skill tests at very high values, and not only do they make it easier to succeed by 2 but they reward you for doing so by not depleting uses when you do. Events such as Cheap Shot and Slip Away also allow you to add your stats together and reward you with powerful additional effects should you succeed by at least 2. If any of these cards was already likely to be a part of your deck (particularly the assets for their repeatability), Quick Thinking is likely a great inclusion to grant you increased action output.

Notably, there are plenty more Rogue cards that reward success by an large amounts, and as the synergy stacks up the potential value of Quick Thinking increases too. We already mentioned the value of trading cards for actions; if you want your actions to generate extra cards, Lucky Cigarette Case and Pickpocketing both do exactly that repeatedly, and again incentivise over-succeeding. With enough incentive, you can more than make up for the difficulty of overcomitting resources to pass skill tests by wider margins, turning Quick Thinking's fair trade of a conditional card for an action into a powerful piece in a deck's engine that generates extra actions seemingly for free.

Finally, no Quick Thinking review would be complete without mentioning Double or Nothing, which turns many of the "succeed by" effects from great tempo plays into crazy combo madness. With current taboos Double or Nothing is more expensive and you can't double two Quick Thinkings at once, making this not quite as powerful as it once was (but this is really a good thing - infinite actions is definitely kind of unfair). Still, Quick Thinking is one of the more powerful and readily available enablers for Double or Nothing duplicating multiple success rewards at once, allowing for explosive 5+ action turns that let you close out objectives in lightning speed, provided you can set this up. The new Daredevil is clearly a fantastic way to do so, provided you're okay risking flipping a Double or Nothing when you might not want to!

So: you may want Quick Thinking in your deck any time your investigator is prone to clearing skill tests by wide margins, either from a large base stat or due to deckbuilding specifically for the "succeed by" archetype. You can probably skip it if your investigator is a generalist looking to pass lots of different skill tests; with your resources divided among multiple stats it is less likely you will reliably have what you need to invest to oversucceed.

Trinity_ · 192
A few other points: Silas can take Quick Thinking, because it's an innate skill, and can conserve it on an unlucky token draw. There are a few cards that grant easy tests that you could play Quick Thinking on, such as Liquid Courage (though most Rogues need to get a high wp team mate to do this test), Stealth, and Feed the Mind (though the last is not in many card pools with QT). I think Stealth (3) deserves particular mention, because it's a fast triggered ability, so you can net an action from it. — Zinjanthropus · 213 6/3/20
Ooh! — Zinjanthropus · 213 6/8/20
Ack! I was going to say you can recur quick thinking with Silas' Elder Sign, very nice! — Zinjanthropus · 213 6/8/20
Just realized that the Daredevil combo actually makes Quick Thinking BETTER when playing with Taboo, as Daredevil is more effective at putting together combos from "Max 1 commit" cards by ignoring dupes of cards you already have for the combo. — HanoverFist · 551 9/11/20
Great with Rex Murphy, who wants to succeed by 2 anyway. — shenaniganz11 · 9 10/28/20
1

"Other card abilities or game effects do not resolve with the altered game state in mind; only the indicated ability/action. - FAQ, v.1.7, March 2020"

This information is outdated. The FAQ v 1.8, October 2020 states instead that "Other card abilities or game effects resolved during this duration are also resolved with the altered game state in mind."

a12345vn · 1
It refers to the limit of 3 actions per turn, so it helps with payday, if you used it during your turn. The text you quoted is a clarificatoin, if you use quick thinking outside your turn, that action is not subtracted from your next turn. — Django · 4434 7/22/19