After you commit Daredevil to a skill test, reveal cards from the top of your deck until you reveal a skill you can commit to this test. Commit it. Shuffle each other revealed card back into your deck. 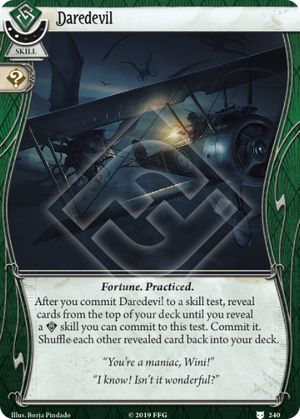 Major enabler for a specific build:

Double or Nothing and All In both have (limit one per test) text. That means once either card has been committed its corresponding copy becomes an invalid target for Daredevil.

As a result once you have Daredevil plus any one copy of Double or Nothing, All In, or a second Daredevil (and no other rogue skill cards in deck) you're guaranteed to get both DoN and All In onto the same test, allowing you to pull up to 10 cards with zero weaknesses. With any luck this can pull you into a second copy of both All In and DoN, allowing for extremely quick deck-cycling.

There's a major catch to this build: for one you cannot include any other rogue skills except an additional copy of Daredevil without risking interrupting the combo. You can include non-rogue skill options however, and for a deck which has the potential to pull twenty cards in a turn its probably not a bad idea to lean into the actionless, costless economy options available to you. Still Rogue has essentially the best collection of skill cards in the game, and missing out on them to enable this combo isn't nothing. This is also an 18-20xp combo with taboo. not cheap

That being said if you can build a deck that otherwise moves quickly you can set up an amazingly potent self-sustaining combo. Toss in some Easy Marks and run this out of Skids as a way to dump all that extra money into actions and you can blitz through scenarios with card draw that will embarrass anything but the most draw-heavy seekers.

I desperately want to love this card. The Artwork, the Flavour text, the Name... It's all I want to be, and especially Wini.

But to be fair, it is terribly underpowered, especially compared to Practice Makes Perfect or Astronomical Atlas.

I would buy this card if it said: "If you succeed by 2-3 or more, add the skill to your hand."

But now, the way it is, it actually makes your Deck worse on many occasions. What if I want to succeed a test and I play Daredevil hoping for Anything You Can Do, Better, only to find out Quick Thinking and waste it? Or even worse for Wini, you pull your Opportunist (2) and it goes to the trash immediately.

What if I have only card to commit to an test and I want to draw another one to proc my and end up finding Anything You Can Do, Better...

It becomes even worse when you take Three Aces into consideration, these cards simply can't cohabit. Which is a shame because Winifred Habbamock Desperately needs an Auto-success for tests.

As is, unfortunately, this card is just a pretty wallpaper in my Binder, but damn I wish it was more... much more.

Valentin1331 · 25306
Practice Makes Perfect is what this card should have been. For a lvl 2 card, Daredevil should have added the card to your hand if you succeed, and for lvl 0 PMP should just commit it and that's it lol. But this card came out when Rogues were doing busted things with Double or Nothing and Three Aces etc. so i guess that is why this is underpowered. — Blood&gore · 102 4/22/22
The list of cards-worse-than-Practice-Makes-Perfect is nearly as long as the list of cards-in-Arkham-Horror-the-Card-Game. Daredevil in Wini is a cantrip Unexpected Courage, which is already decent, plus a random bonus effect. You're gambling (it's called Daredevil), but with cards still in your draw pile — with cards you don't have. It's like cheating, but legal. — Spritz · 66 4/23/22
Daredevil with Three Aces is a combo (albeit one best used outside of Wini). Run those cards with no other Rogue skills. You now have five aces in your deck. It's like cheating, but legal. — Spritz · 66 4/23/22
Yeah comparing it to PMP is a bit unfair because that card is taboo worthy. And like Spritz says, this is a cantrip in Wini which I'd say is never binder fodder. — Nenananas · 223 4/25/22
1

What do you do when you dont now if a card is any good? You flee in numbers.

Of course the -token isnt good for 2xp, so the main-part is the other skill card, but what other skills are there? The fact is that -skills dont have so awesome icons (apart from Cunning), so I would consider to take a skill for its special effect. These skills are:

Fazit
I dont think this card is very good, because it really needs a good other skill to be of use. I only would use it if I have a Double or Nothing & Quick Thinking combo running, in this case the card is very good. The problem I see here is the wrong faction, all other faction (Mystic excluded) have cards that offer 3 and does not have this kind of cards. Most of the 30 card decks have enough chance to have the right cards at the right time, but if you want these cards with a higher chance to the right time in your hand, it is also considerebale, but then you need a high skill card procentage.

Lord Triloth · 1706
Now, if the card allows you to DoN twice in one test (overriding the Max 1 limit), this could be pretty good. Question it, does it? — petercheungjr · 1 1/3/20
By my reckoning, no; "reveal cards from the top of your deck until you reveal a skill you can commit to this test. Commit it." Once we have commited one copy of DoN, the second is not 'a card you can commit to this test.' At least this saves you from accidently quadrupling the difficulty of your test. — Spritz · 66 1/4/20
Good point. I didn't RTFC. Now, I can't recur a card from the discard pile with this, can I? Say if there is no viable target in the deck (but one in the discard pile), I will just reveal cards in the whole deck and reshuffle all the cards revealed without committing any, right? — petercheungjr · 1 1/5/20
this card does thin your deck by one, so might have some application in trying to offset the extra cards from Versatile — Zinjanthropus · 213 6/17/20
What if you reveal a Daredevil from a Daredevil ? Obviously the second Daredevil would go back into your deck, but what about the first one ? Is it a revealed card during the same test so it goes back into your deck too; or because it is reavealed before the effect of the second, it goes to your discard pile ? — LeFricC&#39;estChic · 86 1/8/21
@LeFricC'estChic They both go into your discard after the test like committed cards usually do. The card says other revealed cards (uncommitted ones) get shuffled back in. — flomu · 1 2/7/21
I think this might be really good for pulling out Opportunist (2) if you're a succeed by rogue. If those are your only rogue skills that could work. Since both this card and Opportunist (2) are rogue you could easily run this in an investigator with access to lvl 2 rogue and another core class. — Tacomental · 20 10/11/21