If 2 different non-weakness cards you control are committed to this skill test: Draw 1 card. (Limit once per test.)

effect: +1. After this test ends, for every 2 points you succeeded by, return a card you committed to this test to your hand.

"I can top that."
Aleksander Karcz
Winifred Habbamock #1. 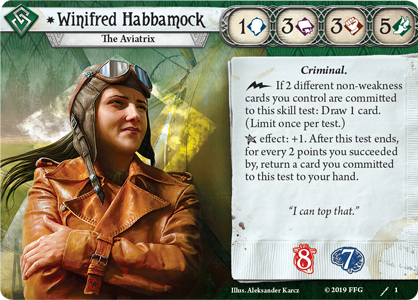 Deckbuilding Requirements (do not count toward deck size): Anything You Can Do, Better; Arrogance; 1 random basic weakness.

Winifred - Weethao as her parents know her, Wini to her friends - was one of the smartest kids in her reservation school. However, her reckless attitude and lack of respect for authority meant she often got herself into trouble. The course of her life changed forever when she found an old biplane in a farmer's garage and decided to "take it out for a spin." The owner, a former pilot in the Great War, was awestruck by her natural talent and offered to teach her what he knew. Now Wini is know as the "woman without fear," showing off her skills in barnstormers all across the country. That nickname would be tested when, during one of her shows, she spotted a creature she could scarcely describe: a thing with leathery wings and a single, mutated, pus-filled eye.
__Deck Building
Search for cards usable by this investigator
Reviews
3

Insane. It’s very easy to trigger her reaction 2 times in a turn, and to succeed by a lot besides.

Winifred’s biggest drawback is that it can be difficult to find tests to over-succeed with. In a group setting she therefore excels in a similar role to Finn, by engaging that one most problematic enemy and keeping them occupied Wini can turn a poorly located enemy into a repeatable source of cards such that evasion isn’t as big a sink of actions as it might be for other characters. In a solo setting Wini needs Lockpicks up right away so that she can reasonably commit her Opportunists to a number of tests without losing them. The end result of this is a draw machine that rivals even Minh.

Of the Mono-color investigators she is quite easily the best, with access to a card pool which complements her strengths, but she does struggle with Willpower tests. For this you will probably want to hold onto a couple guts and maintain a healthy respect for which tests you can fail without major problem.

Take her for a spin, you won’t regret it.

Difrakt · 749
No joke about her card draw. I had 2xOpportunist in my hand, 2xPickpocketing out, and Lucky Cigarette case. Ended up drawing through my deck like 4 times in the second half of the game and ended with 20 resources. It was bonkers. — Zinjanthropus · 20 4/22/20
Just as an addition: I was mostly milking one enemy and investigating mostly, as there was only one enemy out. I didn't have any boosts for investigating, so it was just committing a ton of skills. Minh also helped out with analytical mind, though. — Zinjanthropus · 20 4/22/20
Just hope that you don't get amnesia as a weekness. That would really shut the engine down... — Zinjanthropus · 20 4/22/20
How we deal with the low willpower? Same stat as Finn and same problem: a 1 is too low to try to pass the will tests and it's better just to recover sanity aftewards. But unlike Finn we have no acces to acces to Logical Reasoning or Peter Sylvestre. Liquid courage seems not optimal. After checking, neither we have dump allies with high sanity to soak horror and die. Pobably our best bet is the old Elder Sign Amulet. — Matamagos · 2 6/4/20
There are basically three avenues available to (solo) Wini to succeed at an important wp test IME: Either you save up Anything You Can Do Better (which, even on its own brings that number up to 7--You could probably safely add Watch This! (with a bet) to that in a lot of cases--or you run Say Your Prayers, so that once it gets bad enough that you'll die to Rotting Remains, you might be able to not die--probably also want to commit another card or two to this, just in case-- or you commit an entire hand's worth of wild icons to the test (well, maybe not literally your whole hand, but you get the point). I think you probably want to combine all three strategies, really. I don't think you necessarily need to _only_ use AYCDB for that, though. In multiplayer you have "You Handle This One!" which is surprisingly effective considering you'll probably cycle your deck 3-4 times, drawing these cards each time, You can also intentionally pair up with a mystic (who can Ward (2) your tests, potentially, and is probably a good target for YHTO). If not that, consider partnering with somebody who can take Hallowed Mirror or Logical Reasoning. Elder Sign Amulet is probably not a bad idea, either. I actually think taking Versatile for Hallowed Mirror might not be bad either, as Wini probably isn't going to have too much of an issue with the extra 5 cards. — Zinjanthropus · 20 6/10/20
Oh, there's also Money Talks. That's pretty effective if you're running a deck with a lot of resource gain. You _can_ get a ton of resources with nothing more than Watch This and Lone Wolf, but it can take a pretty long time, so if you aren't specifically taking other econ cards, Money Talks might end up being a dead draw for a good chunk of the game. Then again, Say Your Prayers is inherently a dead draw for much of the game, so it's arguable that it's actually any better than Money Talks. Well Connected is probably quite similar. — Zinjanthropus · 20 6/10/20