Fast. Play at the start of the investigation phase.

This card's gains: “Max once per round.” 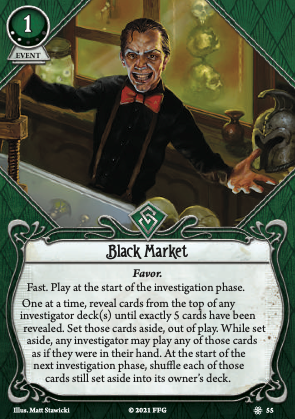 Unlike Teamwork, Untimely Transaction and "You owe me one!", you don't need a team combo to take Black Market (though it's a great moment when team synergies spontaneously arise). Black Market is just an amazing addition to many event-heavy Rogue's arsenal.

If your deck is light on skills* this is literally a Fast 1 resource draw 5 card that can't draw weaknesses**. That's incredible value at 2xp even if you end up only playing 3 of those cards. Just make sure that you and your team has sufficient actions and/or resources to play those cards you just drew, or pack low cost Fast assets and events.

You can even Double, Double it, and play another Black Market straight from Black Market to reveal 15 cards from the top of your deck! Be sure to pack an Ace in the Hole for when you do, you'll use every one of those play actions on your shopping spree.

* As is common for Preston, Sefina, Bob, and many builds running Geas

An amazingly fun card, brings back vibes of Eldritch horror, having a suite of cool things your entire team has access to, really really crazy if you sit down with your team and come up with some combo's with it.

A side note is I cannot seem to add this card to decks, it doesn't show up in card lists when I am making a rogue deck and when I manually search for it no "add copies to deck" function is available, anyone else having this issue with this or any other cards?

EDIT: the issue seems to have been fixed now.

Zerogrim · 254
Yep, have the same issue sadly. — DrMercy · 1 9/30/21
Qn: Does this trigger Revelation effects or does it enable any investigators to trigger those revelation effects or are treachery wasted slots? — Hulahoop12 · 1 10/14/21
@Hulahoop12 it's a reveal effect not a search effect, so it doesn't trigger research effects. — Lasiace · 18 10/14/21
@Hulahoop12 A treachery/weakness would be a wasted slot and cannot be played via Black Market. Page 16 of rules reference states that a play action can target an asset or an event. A treachery/weakness is neither of those. — snacc · 795 3/2/22
1

Not a review, but yet another rules q:

I'm Wendy with a Deja Vu. I play Black market and reveal my own Burn After Reading. Someone else plays it, exiling it and some card from their hand

Can I use Deja Vu on that copy of Burn? Or no, because I didn't exile it? (I know it's in my Exile , but I technically didn't put it there??)

slyguavas · 39
My read would be that Exile is an effect that removes a card from your deck. A card played with Black Market that is discarded goes to its original owners' discard, so it doesn't alter ownership of the card, and it would still be exiled from your deck and not your teammates. — Maseiken · 1 7/16/22
We also see this on Black Market itself. If a card isn't played, its shuffled into "its owners" deck. Despite being playable by any investigator, the cards are still "owned" by the investigator whose deck supplied them. — Maseiken · 1 7/16/22
While that's a fair way to homerule it if you want, Deja Vu is explicit: "cards you exiled." There is no 'your exile'; it was returned to the collection. — Death by Chocolate · 1197 7/16/22
either you exiled it from your deck (and deja vu works) or you didn't exile it from your deck soooo...its still in your deck. I think the actual resolution is other players can't play exile cards because you can't pay costs using other players components, in this case exiling is a cost using someone else's deck, black market lets you play the card but doesn't let you spend things from other players. — Zerogrim · 254 7/16/22
Neither of the exiles in burn after reading are costs though — NarkasisBroon · 9 7/16/22
I think the answer is no, it was exiled, but you didn't exile it. So deja vu doesn't work. Deja vu also therefore wouldn't work if a scenario effect exiled cards but I don't think there are any of those at the moment. — NarkasisBroon · 9 7/16/22
0

As I understand (corect me if I'm wrong). Case study

Start of investigation phase. Sefina Rousseau plays Black Market. There are Pilfer and Backstab among those cards.

It is the turn of Rita Young. She can play this card and she does! Every time she does it, she hits the target and finds the clue, she even passes by 2 or more every time.

In accordance with the "pass by effect", the played cards return to... Sefina Rousseau's hand in the end of Sefina's turn (which may take place next round if this round Sefina had her turn before Rita)? As I understand, they do.

As per my interpretation of rules, in this case the word "you/your" refers to the one who controls the card. Even though Rita can play it as if it is in her hand, the cards are still considered to be controlled by Sefina.

chrome · 20
You're right about the end consequences (in most situations), but not about some of the intermediate steps. The cards are controlled by the investigator who plays them. However, whenever a card owned by one player would enter an out-of-play area belonging to another player, it is physically placed in its owner's equivalent out-of-play area instead (but is still considered to have entered its original destination for the purpose of card effects). — Thatwasademo · 44 7/2/22
What this means for your example is as follows: When Rita plays each Pilfer or Backstab, they enter her discard pile per the normal rules of event resolution, but are placed in Sefina's discard pile instead. Then, at the end of Rita's turn, she returns each copy of Pilfer or Backstab (since she passed by 2 or more for each) to her hand from Sefina's discard pile, but again, they are moved to Sefina's hand. — Thatwasademo · 44 7/2/22
Importantly, the cards are *controlled* by Rita as they are played, so "you" refers to Rita, it's just that because they aren't *owned* by Rita, they get moved to Sefina's discard pile or hand each time they enter Rita's discard pile or hand. — Thatwasademo · 44 7/2/22
Oh, also in all of the above I'm assuming Pilfer and Backstab were revealed from Sefina's deck, and I just realized you didn't explicitly specify that (though you did imply it). Obviously, cards revealed from another investigator's deck would be owned by them. — Thatwasademo · 44 7/2/22
Ok, thanks. I've checked the rules again and your explanation makes a perfect sense. Yes, sure, the cards were revealed from the Sefina's deck (I assume there is no legal way for Rita to have Backstab (3) in her deck anyway?). So I was wrong abit the timing when the cards return to Sefina hand. They do it in the end of Rita's turn. — chrome · 20 7/3/22
Rita might not be able to have Backstab (3), but a third investigator could. And, uh, would you believe I actually missed the point about timing? — Thatwasademo · 44 7/6/22