Fast. Play when you initiate a skill test.

Instead of the skill type indicated for this test (, , , or ), this is a resource skill test. Your base skill value for this test is equal to half the number of resources in your resource pool (rounded down).

You can't buy happiness, but you can buy pretty much everything else.
Robert Laskey
The Circle Undone #29. 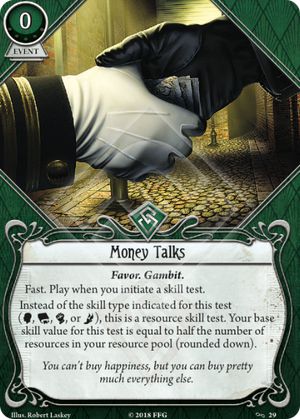 Not very impressed with this card for Preston right now. It does not count the resources on Family Inheritance and requires taking an action to get them in his legit resource pool and I just don't want to spend the extra actions when I could use those resources on a stat pump or use skill cards instead.

miggydoh · 47
Sitting on 10/15 is a legit strat for Preston using Well Connected. I don't think I would bother with this card if I wasn't on Well Connected and the new rogue skill. — Myriad · 713 2/13/19
I was pretty skeptical of this card myself, but my Preston partner in a 2p campaign was at 25 resources for a couple rounds and this made for a laughably easy Double or Nothing. — Death by Chocolate · 421 2/13/19
I'll have to look into a resource hoarding build and give it a second chance. — miggydoh · 47 2/13/19
Has there been an official ruling on this yet in regards to if you can commit still cards to the test? — Myriad · 713 2/15/19
It seems pretty obvious that you could only commit Wild icons since the test is no longer a will, Int, com, or Agi test, but the rules for commuting says “An appropriate skill icon is either one that matches the skill being tested, or a wild icon.“ so wild icons would still apply since Money Talks makes it a ‘resource skill test’ which is still a skill test. — Death by Chocolate · 421 2/15/19
I built a Winifred Habbamock deck than pretty regularly ended up getting over 20 resources once the engine got going with "Watch This!" and Pickpocketing [2]. Ended up introducing this card with Adaptible. It helps a lot with Willpower treacheries or if you just want an easy two clues with Double or Nothing. Pretty good stuff. In the early game it was basically a dead draw, though. — Zinjanthropus · 93 4/30/20
2

Excellent for any character build that stacks resources.

Well Connected builds with several resource cards to support it, based on Preston Fairmont's and Jenny Barnes's extra resource generation can routinely hit 20+ resources. While the resource mountains are primarily collected to channel bonuses on Well Connected, Money Talks is an excellent support card to slot in this archetype. It's just an extra lever for Preston Fairmont to pull to channel his vast wealth into test success.

This is a great card to beat key tests such as scenario specific ones (Talking to Lita Chantler(/card/05005)) or against key treacheries (Ridding yourself of [Frozen in Fear](/card/01164 or not dying to Rotting Remains).

Money Talks is terrific in the right deck, TERRIBLE outside it.