Commit only to a skill test you are performing.

If you succeed by 3 or more, return Opportunist to your hand after this test instead of discarding it. 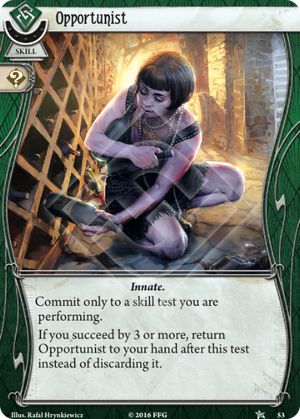 This card has a solid home now in Winifred Habbamock. In fact, I would say it will be a core card for her.

1) Wini can commit this to any test, meaning she only needs 1 other card committed to get her 2 card commitment bonus. Basically, Wini loves having Wild icons in her hand, and Opportunist has one, so that's a point in its favour.

2) If that test succeeds by 3 or more, she gets this card back in her hand. In addition to the card drawn with her investigator ability, getting Opportunist back prevents her from reducing the raw number of cards in her hand when she commits 2 and draws 1 in return. This allows her to continue to use her ability multiple times a round. Think of Opportunist as fuel for her ability.

3) Wini can easily succeed by 3 or more, because she tends to overcommit anyway. Especially true if she uses this on an Agility test! This means you can feel a bit better about using this card, knowing you'll actually get it back.

4) Wini can very successfully lean into the "succeed by X" Rogue archetype meaning that Opportunist is often not the only effect being triggered on a big success.

Overall, while this card is not as great on other investigators, it is really amazing for Winifred specifically.

Soloclue · 2330
If you use this to commit to one test and it gets you to a commit-2 threshold in Wini it’s a deck thinner +an icon. If you get it back it’s free card draw from there out. Huge — Difrakt · 1146 3/26/20
I seriously thought this card would be terrible for the entire lifetime of this game. I just tried Winifred for the first time and I am immediately putting this in. It's amazing how Matt and the team at FFG keep making interesting new investigators that use old cards in cool new ways. — Veronica212 · 182 3/26/20
No joke about Wini loving wild icons. IME even a single wild icon is often better than a double non-wild icon in a lot of cases. — Zinjanthropus · 206 6/24/20
5

This card is quite bad. It might seem superficially attractive, as it's a skill card you can use to boost any important test, and then maybe get it back to boost another important test later.

You might say that the point of Opportunist is that it won't be wasted if you happen to get a really good result, whereas something like Unexpected Courage would be. But in actuality, there are virtually zero tests where a) +1 makes a large difference to your odds of success and b) you nonetheless have decent odds of succeeding by 3+. The math just doesn't work out.

Moreover, there's always a chance that you fail the skill test (or succeed by 1, or succeed by 2 on a skill test that doesn't care how much you succeed by), in which case you lose Opportunist having gotten no benefit at all. Of course, every time you commit any skill card there's a chance it will be wasted. But other skill cards either do more to help you pass the test than Opportunist's rather measly +1, or grant a more useful reward for success.

Quick Thinking is a similar card that is much more useful. It has a better benefit--an extra action is better than just getting Opportunist back in your hand. (Consider that you could use that action to draw a card, or you could use it to fight, move, evade, or whatever's useful at the moment.) Quick Thinking can be used to boost other investigators, whereas Opportunist cannot. Finally, it has a lower activation threshold (2 instead of 3.) Unexpected Courage is a much-superior card, too.

Nonetheless, in the days when the Rogue card pool was thin, Opportunist would see some play, just because the wild icon was helpful. But with a recent influx of quality Rogue cards like Quick Thinking, Think on Your Feet, and Lone Wolf, Rogues no longer need to fill out their decks with chaff like this. Opportunist can be safely set aside.

CaiusDrewart · 2693
"This means that if you did well enough to get Opportunist back, Opportunist did not make a difference on the test." — Jarell88 · 13 9/21/17
Whoops, you can't space out replies to comments it seems. Anyway, this isn't strictly speaking true, particularly on higher difficulties. In hard mode I often find myself committing to a +3 on skill tests to have a reasonably good amount of success, and a +4 or +5 when something absolutely needs to succeed NOW (barring the dread tentacled token, of course). In the latter cases, pulling a 0, -1, or even -2 (if committed all the way to +4 or 5) will refund opportunist, allowing you to reuse it for those absolute must pass checks. Granted it's still not great, but it does make a difference. — Jarell88 · 13 9/21/17
@Jarrel88 technically it does since it adds a ? pip to your check, but i can find other better cards to include with the same pip or more AND adds other functions besides just adding a pip to a skill check. but hey, keep adding this to your deck, have fun and good luck! — majer3raistlin · 22 7/19/18
If only Minh thi phan could use this card... — LeFricC&#39;estChic · 90 11/15/19
With Versatile Minh can add this to her deck already — AquaDrehz · 178 1/16/20
I think there are a lot of better cards for Minh to Versatile for than Opportunist (0) — Zinjanthropus · 206 6/24/20