During your turn, exhaust Eon Chart and spend 1 secret: Choose and take two of the following actions, in any order (move, evade, or investigate).

This card should read “following basic actions” instead of “following actions.” 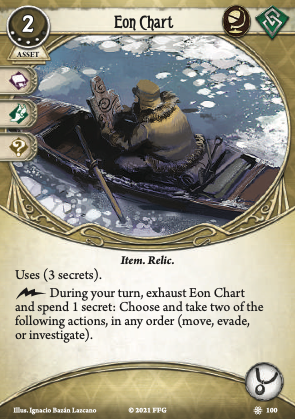 This is a spicy little card. Actions are how you win the game, and getting an extra 6 actions (before you get into secret shenanigans) over the course of a scenario is a big deal. 2 resources to buy more of the most precious resource in Arkham, Time, is quite the trade.

As a bonus, these are actions you often want to be taking. Moving is a necessary tax in most scenarios and being able to do it free massively ups your efficiency, Investigate is how you win the game and are the Seeker's main job, and Evasion can be empowered to be an extremely efficient action for rogues that can amp this up to being worth 9 actions a game with just one copy of pickpocketing 2 alone!

I think Seekers will want this more, simply because move-investigate is going to nearly always be amazing for seekers while move-evade is more situational (though it is a nice thing to pair with lockpicks, many lockpickers are apparently serial smokers), many seekers don't have great a ton of options for their accessory slots, and because seekers can more easily replenish the secrets with cards like Astounding Revelation.

The main thing this is in competition with is Pendant of the Queen but the anti-synergy here is actually really mild, and despite sharing a slot the cards actually work quite well together: Both reward you for running astounding revelation, due to the Pendant rewarding deck search and the chart rewarding secret recharge. Both are temporary assets giving you extreme mobility and action efficiency. And it generally takes a bit, even with good deck search, to get a Pendant going, so you can run an Eon Chart early, use it up in time for Pendant to come out, and then if you run out of your Pendant go back into Eon again to help close out the game!

dezzmont · 160
One question here: Do those actions have to be base actions, or is it allowing me to play an event with bold printed action type of the kind as an additional action? Eventually use burglary, flashlight, etc. — holandato · 2 9/23/21
Yes, you can use free actions to pay the action cost for investigate (or evasion I suppose) actions on scenario, encounter, event, and asset cards. However, in the case of burglary specifically I don't think there is much utility, as burglary is most often used as an easy cig case trigger if anything, though of course this does help out Rex a bit as well.. — dezzmont · 160 9/23/21
I'm assuming, despite this effect being embedded within a fast action, that the Actions taken here qualify for action-counting effects such as Haste and Payday, given that the text here explicitly uses the words "take actions"? — HanoverFist · 556 9/28/21
Not just spicy, it's also sick. :) — ratnip · 58 10/5/21
Bob: This (recur with Scavenging), Leo de Luca, Haste, Ace in the Hole, Red Clock, Pay Day= Holy Hell!! — Alaria · 27 10/12/21
They would count as actions, but can you pick the same action twice? — Alaria · 27 10/13/21
Alaria: No, you have to take two different actions. — olahren · 2488 10/20/21
@olahren: is that an official answer or your interpretation of the card text? — ratnip · 58 10/21/21
I assume that the move and investigate actions, provided by Eon chat, do provoke attacks of opportunity? — hun · 1 10/24/21
@hun yes, because it says "take the following actions" — ratnip · 58 10/25/21
Would this combo with Haste or Payday? From what I gather here it would... — Oriflam · 182 12/28/21
@Oriflam yes it did combo with haste and payday because it is a free 'action'. It will also be affected by ''Frozen in fear''. But the Pathfinder won't be affected by Frozen in fear since it's not a move action. — BoomEzreal · 7 1/4/22
@ratnip @hun no, definitely not. Free actions never trigger aoos (see the FAQ for Attack of Opportunity) — dr31ns5mf · 1 4/24/22
@dr31ns5mf you definitely do trigger aoos. Just look at the FAQ for Ursula. It's about the "taking". The FAQ für aoos just means that triggering the ability on eon chart doesn't provoke, the actions on turn do provoke. — Nils · 1 5/10/22
@olahren - Given the previewed Grappling Hook (Kymani's signature asset) explicitly states "different actions" and Eon Chart doesn't, does that change your position on whether you can take two of the same action with Eon Chart (4)? — dysartes · 1 8/6/22
@dysartes - I agree with that. As long as it is not specified, the actions can be identical — Kerigann · 1 11/3/22
4

Hunch: Eon Chart is better in solo than multi-player.

I ran this in a 3-player EotE campaign with Monterey Jack. Often it didn't really fire up because locations had multiple clues. In order to really fly, you'd want to clear a location and move on. If you can do that, good, but it's not a guarantee.

In a solo Dream Eaters run with Monterey, it's been bonkers. Since most locations only have one clue, Eon Chart can clear the location and get you out of there without a single of your three actions.

Conclusion: Amazing in solo, a little more hit and miss in multi-player.

acotgreave · 498
I'm actually running it on Monterey as well in a 4 player, and we cantv — Therealestize · 47 12/29/21
We can't forget that it also evades as well. You don't have to take a basic investigation action either,you can combo it with cards like fingerprint kit. Or archaic glyphs to really clear clues. I think it's just a great little card. Also eote is very clue heavy. — Therealestize · 47 12/29/21
It also works on the turns where you want to move and then grab a clue. plus Monterey is often okay with moving and leaving a clue to come back to because he recoups it with a card or a resource from his ability. — Death by Chocolate · 1256 12/29/21
@Therealestize - I had the same thing in multi-player with this card. *When* it combos with the right cards in multiplayer, it's great. But I found that if you don't have combo cards it just felt a bit lacklustre. In solo, the amount of times it felt lacklustre are far less (also of note: Rogue is my favourite faction because I love combo shenanigans!) — acotgreave · 498 12/29/21
I’ve seen this in rt tcu 3 players. Minh scavenged it and had 8-10 actions each round. Currently playing jack 2p through eote with lily and scav 2. I recharge both eons with Ariadne. In both cases eon is nuts, it breaks the game for me making it to easy. I think I won’t play this again. — Django · 4420 1/5/22
Sry I meant lily with safeguard 2 — Django · 4420 1/5/22
Another question: In multi-player some people want to take lone wolf. Can one move with Eon Chart before/while checking lone wolf to get the resource despite being on somebodys location before ones turn started? — Scythe · 1 2/7/22
The condition of lone wolf is checked before you are allowed to use the chart. — Tharzax · 1 2/24/22
@Django - 8 acetone? Eon exhausts on use so scavenging doesn't help every turn. — zielinad · 1 4/10/22
Actions*. Also you need a way to discard it in order to get it back. — zielinad · 1 4/10/22