When you search your deck and Astounding Revelation is among the searched cards, discard it: Either gain 2 resources or place 1 secret on an asset you control. (Max one Research ability per search.) 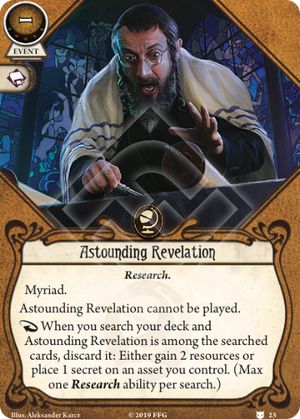 This is very probably the best player card in the Dream Eaters deluxe box. That probably doesn't sound like much since a lot of the cards in this deluxe are kind of narrow and wonky, but this, alongside Pendant of the Queen, really make Dream Eaters, in my opinion, a go to box for anyone who loves the Seeker class. Let's talk about why it's so good, what cards it has synergy with, and who should take it. I apologize ahead of time for all of the math.

First off, why I love this card so much. Let's get past the major downside first: If you draw one of these, it's literally just an for committing to a test. There's nothing else you can do with this card except as a sacrifice to discard effects. So then you might ask what's the chance that I open with one of these in my hand? That will depend entirely on your mulligan strategy.

If you only mulligan away Astounding Revelation (in a standard 33 card deck) and nothing else:

This is because if you happen to get no copies in that opening hand, you mulligan nothing, staying at 0; if you get all 3, simply mulligan all 3; if you get 1, mulligan that 1 and there's a 7.41% chance you draw one of the other two; if you get 2, mulligan those 2 and there's also a 7.41% chance you draw the other one. This is the best strategy to mitigate opening with Astounding Revelation in your hand. It's not necessarily your ideal mulliganing strategy concerning other cards you may want to open with, but I wanted to first illustrate how low you can possibly make these odds.

The other concern aside from opening is obviously drawing it midgame, so ideally your deck maximizes searches and minimizes draw. Let's assume for right now you can search roughly 3 cards a turn, meaning you draw 1 card for every 3 you search. Starting with 28 cards to search through on the first turn, you've roughly a 29.8% chance of seeing at least one copy (if you elect to throw all three into your deck). Let's assume for now you miss it in the search but draw a card from it, and then you draw a card at the end of your turn (from a deck of now 27 cards). There is a 11.1% chance you draw one of these. Let's assume you don't draw it and draw something else instead. This next turn if you search 3 there is now a 32% chance you find one of these in the search, and then a 12% chance you draw one (in a deck of 25) if you don't find it in that search. You get the picture- you're at any point in the game about three times more likely to find it in a search than you are to draw it. If you use a really deep search on the other hand, like Mr. "Rook", on the opening turn you'd see at least one of these 70.4% of the time. You can use Research Librarian to search your entire deck and guarantee getting a copy of this out, which if you do on the opening turn and you also grab a book will reduce your draw chance to 7.69%. You get the point I'm making: if you include a few really solid deep searches in your deck (like Rook's repeatable 9 per turn or Research Librarian's entire deck search), you can very quickly reduce your chances of drawing this card while still very consistently hitting copies of it. The deeper your searches, the better your ratio will be of finding these in a search to drawing them. All in all you can see that I feel the risks on this card are relatively tame, especially since at worst an for an important investigate test is not terrible.

Enough about the risks, let's get to the exciting parts of this card. Firstly, if you run enough search in your deck, this card will thin your deck for you. As long as you hit all of your copies through searches, you've thinned your deck by 3 cards. That means you have a much higher chance through searches, and later on through draws (once you've taken most or all of them out), of getting your best cards when you need them. You will, on average, get them sooner and more often. There is no doubt the belief among many that a thinner deck in Arkham Horror: The Card Game is not as valuable as articles from Magic: The Gathering and the mechanics of other card games would have us believe. The fact remains however that you have a much better chance of drawing the exact cards you need when you need them the less extraneous cards there are. We'll get to some specific cards and investigators who can really benefit from a thinner deck, but for now understand that this is almost universally a plus in card games, and I don't think Arkham Horror is an exception.

Secondly, it's an amazing economy card. Emergency Cache costs 0 resources, but it costs you a card (in its place you could've drawn any other card) and an action to play. This gets you 2 resources at no action and no card cost. That's insane. Even Crack the Case still costs a card and at most usually gets you 4 resources. Sure, you have to activate a search to get it going, so arguably you're mostly refunding the cost of your deck searches for the first pull, but that's still great. I'd happily play Mr. "Rook" for 1 resource, or Research Librarian for no resources. What's more, it can instead net you a secret to put on a card. We'll look at some cards that use secrets in the following section.

Here are some cards that work well with Astounding Revelation:

This is by no means an exhaustive list, but I do not think it's helpful to list out every card with "secret" or "search" in its text. Obviously any cards that help you search that you would have run without Astounding Revelation, like Eureka! or No Stone Unturned, become just that much better if they accidentally net you 2 resources in the process.

Finally, let's look at some investigators who really love this card:

These picks are more left field, but could be cool for the right brew:

I hope I've thoroughly covered what I think are the reasons you should seriously look at this card. I only caution that you use it in a deck that doesn't try to draw too many cards. Perception for example hurts this card. Don't be afraid of Astounding Revelation: take all 3 copies and see how it works for you!

You need some "search" groundwork to make this thing useful, Mr. "Rook" and Eureka! are good startpoints. If you get an opening "Rook" and slam a couple Astounding Revelation in the first set of searches you'll be in a great spot to win the scenario, if you dont find an early Mr. "Rook" then you're a bit screwed as your draws will get muddled with an Astounding Revelation here and there.

If the wall of text on the in-depth review seems like a lot, here's a couple outstanding combos for this card other than Mr. "Rook":

This thing is frustrating, but trust me, it's strong.

Tsuruki23 · 2350
It is quite a wall of text, but this is definitely a card that deserves it. Very good and very intimidating. — StyxTBeuford · 12744 3/26/20
Zoey can also love a single copy of Astounding Revalation for Stick to the Plan. It's basically a 0xp Another Day Another Dollar for Roland and Zoey that ALSO tightens the deck by another card. She could splash the other two with the same combos you've mentioned, but might want the flex slots for other things. — Death by Chocolate · 1251 3/26/20