Discard a card with at least 1 skill icon from your hand: Place 1 resource on Archaic Glyphs from the token pool, as a secret.

Forced - After the third secret is placed on Archaic Glyphs: Discard Archaic Glyphs and gain 5 resources. Record in your Campaign Log that "you have translated the glyphs."

Anna Christenson
The Path to Carcosa #25. 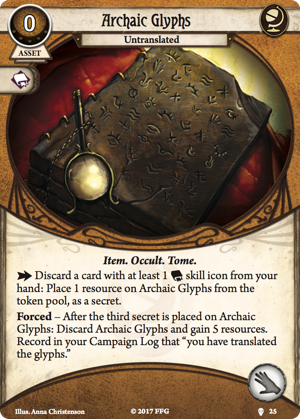 Review written after the full Path to Carcosa (And Return To Path of Carcosa) has been released:

Archaic Glyphs and it's counterparts Strange Solution and Ancient Stone are pseudo-weaknesses that detract from achieving your objectives in whatever scenario you play, and that's the point; the cards that Archaic Glyphs upgrade into are, as a result, more powerful for their resource and exp costs. Essentially, you're trading away your deck's effectiveness in the early scenarios for more effectiveness in the later ones. That is a strong reason to include this card, because like Delve Too Deep, you have the power to mitigate the amount of a drawback having this card imposes on you by:

I re-iterate that this card is bad and that's the point. Judging it by comparing to other non-quest cards is a mistake. Instead, let's go through the investigators that can take this card, and see how easily they would complete this card's quest, and how desirable the upgraded versions are to them:

Lucaxiom · 1878
No mention of Lola? It’s true she only has 3 Int, but she can run Higher education and Rogue economy to easily make use of the upgrade, and she can discard freely to the glyphs regardless of the cards class in hand. (I ran this in PtC and it was brutally effective.) — Death by Chocolate · 57 10/16/19
Also, RAW Truth from Fiction and Enraptured can’t place secrets in it because it doesn’t say “Uses (X secrets)” on the card. — Death by Chocolate · 57 10/16/19
If Truth from Fiction can't place secrets on the glyphs, neither can the glyphs themselves, for the exact same reason. — TheNameWasTaken · 3 10/16/19
Except that the glyphs reference themselves by name, so it’s a situation of specific rule overrides general. — Death by Chocolate · 57 10/17/19
The specific overrides general principle can't override "cannot", which is what the rules for uses say. — TheNameWasTaken · 3 10/17/19
“If the text of a card directly contradicts the text of either the Rules Reference or the Learn to Play book, the text of the card takes precedence.“ ‘cannot’ being absolute is a rule in the rules reference. I see nothing that prevents a card overriding “cannot” in a situation like this. But I agree it probably should say Uses (0 secrets) to avoid this issue. — Death by Chocolate · 57 10/17/19
Archaic Glyphs: Guiding Stones + Higher Education is just ridiculous. You get 1 clue for 1 ressource (+2 INT). Using this, i got like 30 clues in a single action several times (on strategic difficulty, which is a house rule to need more clues to win). Using Burglary + Milan i could get 4 ressources in one action each turn, as well. — Django · 2753 10/18/19
Do secrets carry over between scenarios when playing in campaign mode? For example, if I end scenario 1 with two secrets on it, does that mean I only need one more in a later scenario, or do I start all over from zero? — mgeis · 1 8/19/20
Django: you can only get 30 clue sin a single action if there are 30 clues on the location to get — Timlagor · 1 8/24/20
Secrets do not carry over from scenario to scenario: no tokens do, only what is recorded on the log (xp, trauma and whatever the scenario specifically mentions usually in the resolution). — Timlagor · 1 8/24/20
1

Note: this is being written as of The Path to Carcosa with no mythos packs of the cycle published.

But who should take it, while the upgrades are still unknown? Seekers who can afford to carry two fairly useless cards (with one useful skill icon) are reasonable choices but Akachi Onyele gives the best risk/reward opportunity and the reason is her fairly bizarre deckbuilding restrictions.

Akachi can take all mystic and neutral cards, as you would expect, but then can also take cards with uses (charges) up to level 4 and then occult cards of level 0. Guess how many cards with uses (charges) are not already Mystic cards (as of The Path to Carcosa)? If you guessed zero, you're right! And how many Occult cards are level 0? Precisely one: these Archaic Glyphs. So to make Akachi's deckbuilding restrictions make any sense at all, the upgrade for Archaic Glyphs will be a seeker card (Hand. Item. Occult. Tome) that will have uses (charges) AND will probably not have that many charges on it so as to make Akachi's special powers that much more valuable: namely the ability to automatically add an extra charge onto the card as well as being able to recover it back in hand with Spirit-Speaker.

This speculative review will be revised once we know all the upgrades available for Archaic Glyphs.

franzel · 22
It does seem like this is a plant for Akachi, but it also seems she would have a problem actually translating the Glyphs since the cards she has access to with intellect icons seem either not right for her (Alyssa Graham, Forbidden Knowledge), generally a bit rubbish (Mystical Teachings, Scrying, Moonlight Ritual) or far too important to be discarded to this card (Rite of Seeking, Drawn to the Flame). Add to that the fact that it eats up your precious actions and it doesn’t seem likely she will ever manage to get successful translation whilst still doing well in the scenarios. — ksym77 · 54 10/11/17
It's a good point, but at the same time, she only has to successfully do it once. After that, they're just marginally useless cards to her. It's entirely possible that the investment won't be worth it! We won't know until we see the rest of the campaign. — franzel · 22 10/12/17
Also I just found out that the June FAQ allows wild icons to also match which gives you some more options to get it done the one time. — franzel · 22 10/12/17
Also super useful to note that this is a Tome, so with Daisy... — Orangerequired · 1 10/17/17
This is exactly why I have given Akachi this card, and once I had translated the glyphs, traded them in for something else... — Panzerbjrn · 23 11/3/17
Well, the leveled-up versions are out (in stores if not online). franzel's predictions are only partially correct: the leveled-up versions are Seeker cards (arcane, Spell) with a few charges (allowing Akachi to take them). But neither of them fit with Akachi, because they're intellect-based. They're a better fit for Marie who has the intellect to make use of them. — Khudzlin · 1 12/15/17
Indeed. And although Guiding Stones is the more efficient option, I think I'm going to be putting Prophecy Foretold in my Minh deck because it's an evade that works on elites but doesn't have to test against the evade score. AND it still gets a clue. — franzel · 22 12/21/17
Can i discard a card with "?"(wild) icon ? As a matter of fact it can be considered as a "book icon"... — Rosco · 1 7/9/18
FAQ v1.3 says, A Wild (?) skill icon on a player card may be used to match any other skill icon for the purposes of both card abilities and counting how many matching icons are committed to a skill test." Since this is a card ability, you can discard a card with a wild icon to count as a card with a book icon. — gillum · 1 7/12/18