You may take an additional action during your turn, which can only be used on Tome abilities.

effect: +0. If you succeed, draw 1 card for each Tome you control.

"I know of books so powerful, they can rewrite reality."
Magali Villeneuve
Core Set #2. 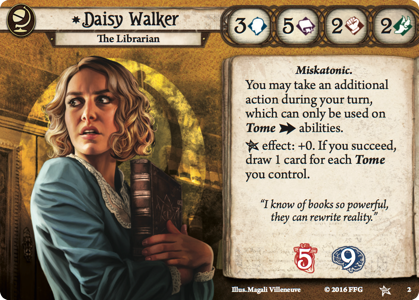 As a respected librarian at Miskatonic University, Daisy had always felt that books were the most important thing in her life. She explored in fiction what she abhorred in life: horror, violence, fear. Then, she stumbled across the John Dee translation of the Necronomicon. It was blasphemous, unholy, and too awful to be read. But given her studies in obscure and occult subjects, Daisy knew there was more truth than fiction within the book's pages. She began to wonder what other secrets the restricted collection of the Orne Library held... 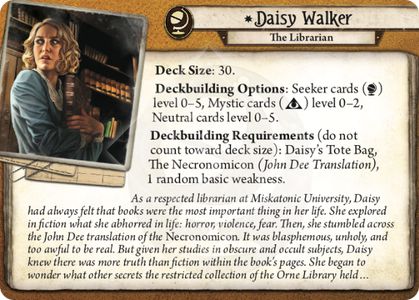 She likes big books and she likes to Scry

You other brothers can't deny

That when a girl walks in with a literary taste

And a bound thing in her case

Cuz you notice that book was stuffed

Safe in the bag she's holdin’

Those pages aint for foldin’

Oh, baby I wanna read with ya

My tomeboys say its tainted

But that book she got

Make her so fixated

Ooh, you got Rumpelstiltskin?

You say you think you know the shelf?

Well show me, show me, cuz it aint that average library

Some with romance in

She roams, reads tomes , gets goin like a turbo Holmes

Saying flat books are the thing

Take any bibliophile and ask them that

Has your girlfriend got a book (hell yeah)

There's three ways to play Daisy Walker. Okay, possibly more, but these are the most obvious. :)

1) Detective Daisy! You can make her into Nancy Drew extraordinaire; backed up by a large amount of Seeker cards, Old Book of Lore, Dr. Milan Christopher and her amazing 5 Knowledge. In a campaign she'll probably eventually complete her Higher Education and figure out the Sordid Secret of the Strange Solution, giving her both great Willpower and some decent fighting skills.

PRO +The advantage of this build is that Daisy will be a great clue gatherer with access to both card drawing, extra resources and even a bit of combat. +It's a versatile and fun playstyle. Seekers tend to be a valuable party members and you can often help your friends (free cards! Medical assistance!) if you have spare time.

CON -Rex Murphy is arguably the better clue gatherer, while not being as versatile as Daisy. I personally think Daisy is more fun to play, but that's like, just my opinion, man. -Detectice Daisy doesn't have room for more than a few Mystic Cards. Ward of Protection, maybe even a Shrivelling and a Holy Rosary, but she can't really go Team Purple when so heavily invested in Team Brown. -Even with a few combat cards you'll never be a scrapper. Bring someone to babysit you and don't split the party (too much).

2) Witchy Daisy! You can play Daisy dual-class: part-time sorcereress, part-time detective. This will give her decent combat abilities in form of cards such as Shrivelling, access to plenty of powerful Mystic cards and still let her perform well in her role as a clue gatherer. You WILL need to add several support cards such as Holy Rosary and Higher Education to make up for her 3 Willpower, but it's doable.

PRO +So many options! You can Scry, you can Shrivel, blind your enemies and unravel the mysteries of the universe. And you can still investige better than most.

CON -I feel that the Mystic cards, while powerful and versatile, always have a high cost. They demand a premium of resources, actions and/or sanity. It's easier to cope with this if you specialize and Daisy will never be able to do that as well as her as her more arcane colleagues.

3) Helpful Daisy! Daisy is great at support - her Seeker/Mystic combination and free tome action ability is a really powerful combination. She can heal damage with Medical Texts and Horror with Clarity of Mind. She can let her friends draw cards with Old Book of Lore, she can Scry, she can use Ward of Protection. And if that's not needed, she can still investigate better than most.

PRO +No one can support as Daisy (at least not 'till The Path to Carcosa is released).

CON -The more support cards you'll include, the less useful Daisy will be on her own. -This game isn't really dependant on support characters. Time is of the essence, so why help other people do stuff when you can just do it yourself? You could argue that support-Daisy allows the other investigators to specialize more, but she's still spend precious actions on healing when she could be advancing the story.

In conclusion, I prefer option #1, as I think playing on Daisy's strength as a Seeker is the better choice. There's still room to dabble a bit in mysticism and support cards, so you have lots of variety. Options #2 is a completely acceptable way of playing Daisy as well; Witchy Daisy can be super-versatile, especially if she's the only spellcaster in the gang. PS: I would think twice before playing her in a Hard campaign - her 3 Willpower will cause problems.

Option #3 is a bit more complicated, as it's (obviously) multiplayer only. You'll need to design your deck to fit in with the group and your group need to design decks that actually need your support. It's a great option but for advanced players only.

If you're like me and tend to get bored with one-dimensional characters (looking at you, Zoey!), you'll love Daisy. Yeah, she's a seeker at heart, but access to a huge card pool and a free tome action each round gives her more options than most other investigators. And options = fun. :)

Daisy Walker seems like a mild-mannered librarian, and in many ways, she is. But with a little bit of magic in her, she can be so much more.

Daisy's biggest strength seems pretty apparent: At 5 base Intellect, investigations are little challenge, and her passive becomes phenomenal when paired with any of the tomes in the game, with Old Book of Lore being the most useful. Combine this with Dr. Milan Christopher, and her resource game is set. Add in a Magnifying Glass for an even bigger boost, and if combat's going to be a thing, there's always Mind over Matter.

Her activation always seems amazing: Coupled with her passive, why not just load her up with all the tomes? Because it's horribly unreliable. Daisy seems like a card drawing fiend, but don't be fooled: choose your tomes wisely, and consider using a Research Librarian to get them quickly. Arkham Horror really makes you want those free actions!

Of course, Daisy isn't great at everything: She needs some serious back-up to fight or evade. The previously mentioned Mind over Matter helps in a pinch when fighting, but it's situational. At 5 health, Daisy can't slug around with ghouls and crazies like Roland Banks can. She would need some armor to even hope surviving the night.

This is where her Mystic dip comes into play: At 3 Willpower, Daisy has the wherewithal to cast some of the staple spells: Shrivelling and Scrying help make it so she doesn't have to fight something she doesn't want to (or if she does, it gets wiped out quickly), Fearless helps get The Necronomicon under control (Or can be used to make Forbidden Knowledge not so sanity intensive), and the Holy Rosary buffs her Willpower to make spells better at succeeding.

In conclusion, Daisy is a support character at her core. She's there to filter decks, warn the party of what's coming, and investigate the heck out of some places. She is nowhere near a front-line fighter, but a few smart card choices can help her deal damage when she needs to, and then get out of dodge. She is my favorite investigator by far, though, because when it's all hitting the fan, Daisy's investigating prowess is all the table needs to advance the agenda and make it out safely.

Surprised to not see any comparisons between Core Daisy and her Read Or Die version.

The front sides provide you a clear choice: Do you want constant extra actions, or do you want constant stat bonuses? With two or fewer tomes, Read or Die Daisy (Front) is just a purely worse version of the Core card, so to get anything out of it you should plan to have 3+ tomes in play - requiring a deck full of tomes, plus the actions to play them, plus the means to hold more (Daisy's Tote Bag, naturally, plus Arcane Enlightenment). In return for this lengthy build-up, however, you can eventually reach high levels of Willpower towards the middle of the scenario. In a way, this is reminiscent of Diana Stanley, but relying primarily on investigation rather than combat to see you through the early game.

The two versions of Daisy's deck-building are intriguing in their differences. First the overlap: both can take Neutral cards 0-5. Core Daisy can further take Seeker cards 0-5 and any number of Mystic cards 0-2. Read or Die Daisy loses some functionality in both aspects. Her cross-class abilities get dramatically reduced, limiting her to only 5 level 0 cards (though these cards can come from Guardian now as well as Mystic, there is relatively little in Guardian that will appeal to many Daisy decks). Her Seeker options are also dramatically hindered; in exchange for losing access to most high-level cards of her class, she gains access to exactly 3 tomes which the Core version can't include:

Ironically the Read or Die front may combo better with the Core back of Daisy than with the Read or Die back -- in the quest to build Daisy like an investigating version of Diana Stanley, it would be a shame to be limited to only 5 level 0 Mystic cards.

Finally, it seems worth talking about the two Advanced versions of her signature cards (remember that unlike the alternate versions of her player card, the Advanced cards must be used together):

Thus, in most cases, using the Advanced versions of her signature cards gives you both a higher ceiling and a higher floor, with the weakness only making life worse for you in certain scenarios.