While you control a Tome or Relic asset, you get +1 .

After you reveal a location or put a new location into play, exhaust Whitton Greene: Search the top 6 cards of your deck for a Tome or Relic asset and draw it. Shuffle your deck. 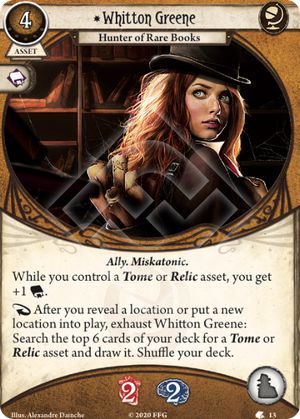 How is this ally better than Dr. M? While it does not seem fair towards other allies, it is only reasonable to ask this question. So how is Whitton Greene better? Can she, in fact, be better?

Whitton's +1 is conditional, but depending on your deck, the condition doesn't need to be that harsh. Plus she actively works on fulfilling the condition!

While Milan gives you pretty reliably a coin every turn, Whitton does something completely different. She finds your books, she finds your relics, she triggers deck searches, thinning your deck so you can draw other important stuff earlier. All this is very synergical with the cardpool. Milan makes you rich, Whitton makes you stronger and faster.

If you have upgraded the Dream Diary, you want to draw it as soon as you can. Milan doesn't help with that. If you are planning to assemble the Pendant of the Queen, it is Whitton who finds you the pieces. Plus it is reasonable to expect her to trigger an Astounding Revelation or two and give you some money so you don't miss Milan that much.

Whitton's impact only increases with lower player count. But even in larger groups, you can find a way to trigger her enough times to find all the stuff you need.

Picking Milan is rarely a bad choice. But we shouldn't be lazy and do it automatically, because other allies may be just the same help, sometimes even bigger.

Whitton Greene suffers from the same problem as Jake Williams, in that (depending on the scenario) it can be hard to trigger her reaction consistently. And if you want to benefit from her boost, you need to be confident of finding a Tome or Relic on one of those (infrequent) searches, or drawing one by other means.

But! All is not lost! There's one investigator who can put a new location into play whenever he pleases, and who starts the game with a Relic in play: Luke Robinson!

RhialtoTheMarvellous · 5
Nice catch! Whitton should be very good for an intellect focused Luke. I think you could get Luke up to a decent int stat if you wanted to. With Whitton and 2 Cameras or Mag Glasses he could be at 6, which is very respectable. I think there is a substantial benefit to not having to find a spell in order to start investigating. — Zinjanthropus · 213 8/2/20
Also, note that Whitton (2) boosts both int and wp — Zinjanthropus · 213 9/5/20
2

In my eyes, quite underrated. Now, she's not as OP as Milan Christopher or Mr. Rook, that's true, but there's one investigator in particular for whom Whitton is an absolute must-have: Norman Withers. She serves three functions for Norman:

She gets even better for Norman when upgraded, as he benefits from both the deeper search and the +1 willpower, as he becomes more mystic.

So... pretty early to post a review of a card that won't come out for probably a long time (if ever), but I'm pretty hype for this one.

The big thing for me is that normally investigators tend to rely upon hand slots for boosts, whether it be from the classic Mag Glasses or the recently fairly popular Hawk-Eye Folding Camera. That means that if you're running cool cards like Occult Lexicon you sacrifice some ability to boost your . Whitton not only helps alleviate this problem by giving you a boost while you're holding a tome or relic, but also helps you find said tomes and relics.

The obvious application is Daisy Walker, as she is so far the only investigator for whom (most) tomes don't suck. However, the first thing that came to my mind was Ursula Downs with the Ornate Bow (which is a relic). Normally you have to sacrifice some investigative power in order to wield the Bow (unless you can get Elli to wield it for you, but when I've gone the Elli route in the past, I usually end up cutting all other hand slots anyway because it's so unlikely that she'll find the Bow, specifically). I think it's also worth mentioning that I almost always run Crystalline Elder Sign in Ursula, especially in true solo. Whitton can also help you find that! To be fair, between Crystalline Elder Sign and Fieldwork, I seldom feel like I need help investigating, but there's always stuff like The Last King where most locations don't have clues but you still want boosts (Fieldwork can't do this, though neither can Mag Glass). And it certainly never hurts to be 1 higher in intellect.

Another point is that you need to put into play or reveal a new location to trigger it. Having played with Jake Williams before, I can tell you that this is better in some scenarios than others. The Depths of Yoth and The Boundary Beyond in particular have a lot of this, while other scenarios start with all locations revealed, or just don't have many locations. Still, in true solo, at least, you'll probably be revealing a lot of locations, and each time you get to search for a relic or tome. Makes it much more likely that you'll get your key assets out early.

Some other notable relic traited assets that Whitton Green can help you find: Ancient Stone, Key of Ys, Grotesque Statue, Pnakotic Manuscripts, Hallowed Mirror and many others.

I am less knowledgeable about what tomes are good, but definitely Encyclopedia and Old Book of Lore for Daisy, and eventually The Necronomicon (Petrus De Dacia Translation) (even for non-Daisy). Also Occult Lexicon, which I'm a pretty big fan of in a lot of decks (especially ones that don't use the Bow).

Zinjanthropus · 213
I'd definitely use it in my Ursula deck. It works with Dream Diary x2, which are Tomes :-) I also use Jewel of Aureolus to ensure I can power Higher Ed. — Palefang · 59 5/8/20
good point about dream diary. that actually makes it pretty good in Minh, too, as she probably likes both Dream Diary and Occult Lexicon. — Zinjanthropus · 213 5/10/20
Great review, especially on her being sturdier than Milan. I'm more impressed by her ability to find relics than tomes actually, especially if you're running a Segment of Onyx deck. To make up for her cost of 4, I'd recommend Astounding Revelation. — Moogle · 1 7/3/20
I can see a potential in a Mandy deck as well, maybe if Mr Rook gets restricted/erratad at some point. Could mean a lot of free search triggers, even if you dont mean to find tomes/relics ... — Schwaig · 41 7/27/20
@Schwaig: Yeah, I think there's a good chance that Whitton will be replacing Rook in a lot of Pendant decks, if he gets a taboo. Needless to say her search ability is not quite as reliable, though. — Zinjanthropus · 213 8/3/20
How about a Mandy Deck with both Whitton and Rook? — LivefromBenefitSt · 937 9/7/20
0

Wholly unimpressive. The faction is chock full of draw-mechanics that are better than this, and there are allies who do the + buff unconditionally.

It is a bit nice that you can use her to sift for a Segment of Onyx and other relics, which is handy sometimes.

She is'nt terrible, she's just worse than the status Quo, which is a pretty high bar to aim for. If there are big nerfs as of this review (Okt 2020) then my stance might drastically change.

Tsuruki23 · 2350
I mean, the Seeker status quo without taboo is Milan and Rook (the latter is fully expected to be taboo soon). Picking between Whitton and taboo Milan seems like a genuine choice, especially if you’re anyone who cares about tomes or relics. Luke starts with one in play, and anyone with Charon’s Obol access can have her bonus on permanently as well (Ursula, Trish). It all depends on what you’re fishing for, but I will say her level 2 version makes taboo Milan look pretty weak, especially as Seekers have better means of burst resources now. — StyxTBeuford · 12744 10/6/20
I tried running her in a few decks, and I'd say she's pretty good. The 2xp version a bit more so though (searching 6 deep is a bit underwhelming). The key is having good targets like Dream Diary, Occult Lexicon, or Crystalline Elder Sign. She can allow you to take some of those as only 1 copy which can save a lot of XP and deck space. Also definitely sturdier than Dr. Milan. — Zinjanthropus · 213 10/7/20
Pretty good for Roland Banks and Joe Diamand get Timeworn Brand, Armor of Ardennes (roland only) and Pendant of the queen. Will boost on her upgrade is also great for both. — Django · 4428 10/7/20
Though, I'm guessing she is worse on higher player counts, as it's less likely that Whitton's controller will be able to reveal all the locations. Also pretty bad if you draw her late after all locations are revealed. — Zinjanthropus · 213 10/7/20