Dimitri Bielak
Before the Black Throne #316. 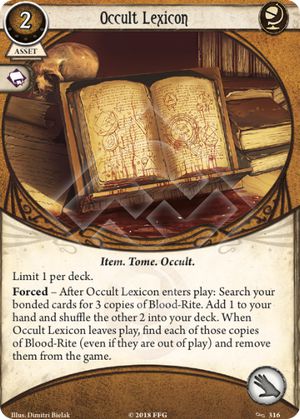 I've seen players comment on their experience with playing Occult Lexicon a few times during a scenario. Based on my understanding of the card, that's not possible.

Bonded cards have this ruling:
New Keyword: Bonded. If your deck contains a card which summons one or more bonded cards, those bonded cards should be set aside at the start of each game.

VanyelAshke · 171
That appears to be the current consensus yes — Sycopath · 1 1/3/21
I agree. Nightmare bauble sets attached parasites asside when it leaves play so I guess they come again if you replay it (only those attached, not those in other areas) — Django · 4428 1/3/21
5

This works well with Ancient Stone: Knowledge of the Elders. If you have the Stone out and 2 resources on hand, playing Blood-Rite creates 2-4 testless damage to any enemy at your location, no matter if it’s engaged with you, engaged with another investigator, or aloof. When you use it for 4 damage, you only lose 2 secrets from your stone, keeping more for later use. You could possibly have multiple copies of Blood-Rite in hand, setting up massive guaranteed damage, even against the toughest enemies in the game. Powerful combination, but it takes both hands!

I think it’s worth mentioning that this (along with Hallowed Mirror) are Occult cards, meaning they can be taken by your favorite shaman and mine, Akachi Onyele! Blood-Rite is pretty versatile, the full suite netting you 6 cards over 4 actions (if you value such strict mathematical breakdowns) and can let you pitch cards you don’t need for resources that you probably do and some damage pings to boot.

Not saying it’s an automatic include or anything, but I think it’s got some good applications in her deck.

Nerindil · 4
I think running Lexicon with Akachi is a pretty good idea! She tends to be dependent on drawing key assests and has a very powerful signature card -- Blood Rite helps you find them while potentially helping you pay for them. Additionally, Arcane Initiate can draw Blood Rite, and Akachi probably doesn't mind using a hand slot for the Lexicon. — Spritz · 66 8/7/19
On the other hand -- having given it more thought -- spending an action to play the Lexicon so that you can spend actions to play Blood Rite so that you can spend actions playing spell assets so that you can finally be useful may not be the best plan. On the other OTHER hand, if you are reliably beating up enemies testlessly while doing the above it looks a lot better, it's just expensive. — Spritz · 66 8/7/19
Yeah, using Blood Rite for card draw is not super great since it draws two cards - one of which you could have drawn instead of it and the other of which you could have drawn with the action used to cast Blood Rite. It is still valuable for its flexibility and testless damage. (And it does add more targets for Arcane Initiate.) — Death by Chocolate · 1251 8/7/19
I played this card with Carolyn, but i think it's too slow and blocks one handslot that could hold a weapon (meatcleaver in her case). It also costs 3 actions to draw the Lexicon and the 2 rites that are shuffled into your deck... — Django · 4428 8/7/19
I published a Minh deck a while back which was built around this card. She can take Research Librarian to tutor for it and Scavenging to fetch it back when it leaves play. combo that with Mag Glass(1) which can be used to bump it from hand at will and it means that you can continually recycle the Blood Rites without needing to draw them from your deck (although Minh has draw for days in any case) — Sassenach · 168 8/7/19
You don’t need to draw them with that combo, but having to spend another action and two resources seems a much steeper price - especially for Minh. — Death by Chocolate · 1251 8/9/19
Sure, you wouldn't want to do that if you don't have to, but it does mean that you're not stuck with having to draw through the deck and allows for you to play Blood Rite multiple times in a scenario — Sassenach · 168 8/9/19
that sounds like it gets a lot better with Scavenging (2) if i understand you correctly — Zinjanthropus · 213 6/4/20
3

I do not like Occult Lexicon; it's not a bad card in any way, just the first four words in the text complicate matters significantly: "limit one per deck":

Given how long scenarios typically last, and the punitive aspect of weaknesses that punish over-drawing, Arkham Horror LCG tends to leave a sizeable stack of cards left in your deck by the time a scenario ends, where even cards you've included two copies of have a chance of not showing up for any one scenario. This makes single copies in your deck very unreliable, and depending on them showing up early is ill-advised.

And Occult Lexicon value depreciates significantly the further into the game you draw it. After playing only one copy of Blood-Rite, you've broken even in terms of tempo: one action to play Occult Lexicon and one action to play one copy of Blood-Rite nets you two cards, two resources, two damage, or any combination thereof in two actions, what you would've gotten with basic actions. To get a return on investment, you need to draw one specific card, play it, play the other card that just entered your hand, wait till you draw one of the two remaining copies of that card, and then play a third card; a feat made unlikely to occur often with the deck limit.

You could always tutor Occult Lexicon out, there's Backpack and Research Librarian for that, but I advise against it, as it compounds the slow nature of Occult Lexicon. Now instead of spending two actions to get something back, you're spending three. Tutors are much better spent on impactful cards that you would be willing to spend two actions to have now rather than one later (or one and zero respectively it the card is fast). Occult Lexicon enriches your deck with better than average cards with high flexibilty; it's immediate impact is lacking.

Now despite all that, there's one sterling example of when Occult Lexicon might very well be an auto-include; in a Marie Lambeau deck. Marie wants spell assets or non-fast spell events to make use of her special ability, and Occult Lexicon enriches her deck with not just above-average cards, but above average spell events, eliminating their slow nature somewhat as they might as well be fast cards when played with her additional action. In addition, Hallowed Mirror works exactly the same as Occult Lexicon in this regard (and Marie can take both, as the're both lvl0 occult cards), with their respective spells being all-purpose enough that you're happy with drawing either. With that in mind, you can treat Occult Lexicon and Hallowed Mirror as a pair of a single card, just like any other card that you can include two copies of, which eliminates the other downside of those cards.

Lucaxiom · 3547
I think you’re being harsh on the Lexicon’s action intensiveness. A potential 6 testless damage in a class that is terrible at dealing damage at all should not be ignored, especially for higher difficulties. Seekers also have significantly less opp cost for including one ofs in their decks because, well, they Seek incredibly well. Mandy Thompson in particular finds this card super fast. Also, it has a fun interaction with Pendant of the Queen: assemble Pendant, then break it, then assemble it again, using Lexicon to add cards to your deck should it run the risk of recycling before you can use all the Pendant charges. — StyxTBeuford · 12744 1/9/20
I agree with StyxTBeuford. Mandy gets great value from this easily. I suspect Daisy would as well as she also has crazy draw and tutor, but I haven't tried it with other seekers — NarkasisBroon · 10 1/9/20
Luke can use the rites at adjacent locations — Django · 4428 1/10/20
I haven't tried it yet, but I wonder if a versatile Patrice Hathaway would like this book. — jdk5143 · 96 1/10/20
Luke and Marie can also find Blood- — Zinjanthropus · 213 4/12/20
Luke and Marie can also find Blood-Rite with Arcane Initiate — Zinjanthropus · 213 4/12/20
Seekers can EASILY go through their deck before the end of the game. — Tilted Libra · 28 6/14/20
I have setup my latest Seeker decks with so much card draw that I was blowing through the deck. And this was with Joe and Ursula which aren't card draw powerhouses. Joe easily found 2 if not all 3 copies of Soothing Melody most scenarios and this would synergize well with Hallowed Mirror. Ursula can also take both. Something for me to think about the next time I play them. — TWWaterfalls · 862 8/11/20
Using the Research Librarian to locate this book with any Astounding Revelation left in your deck is also improved economy. — Time4Tiddy · 213 1/3/21
Even most Level 0 Seekers can comfortably draw through their entire deck at least once per scenario, or have some type of tutoring effect like Research Librarian or Backpack, so only having a Singleton card (that draw itself into copies of Blood-Rite) really isn't a downside. — Telosa · 21 8/26/22