Draw 2 cards. Discard up to 2 cards from your hand. For each card thusly discarded, you may either gain 1 resource, or spend 1 resource to deal 1 damage to an enemy at your location. This action does not provoke attacks of opportunity.

Andreia Ugrai
Before the Black Throne #317. 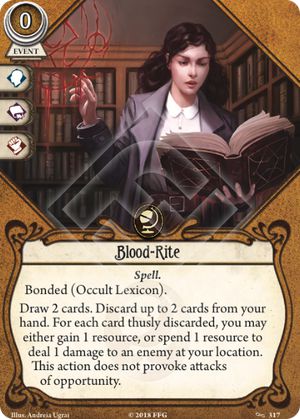 Because of the many possibilities this card opens up -- and the fact that you have to play a bonded asset to access it -- it often confuses people. They try to calculate whether drawing two cards for an action is worth it, or how often they are going to want to trade a card for a resource. The damage-dealing capacity of the card, which involves both discarding cards and paying resources, only makes things murkier.

Nevertheless, this is an outstanding card. One usage along justifies it -- all the rest simply gives you more flexibility. For simplicity's sake, try reading it this way:

"Spend an action. Discard the top two cards of your deck and deal one damage to an enemy at your location."

That's basically what would happen if you used Blood-rite to draw two cards and discard them both -- using one discard to gain a resource, and the other to spend that resource and deal a damage. The only thing that could derail that plan would be drawing a weakness, and even then, you could probably still pull it off with an additional discard from your hand.

How many level zero cards let you deal guaranteed, almost costless damage like that? Sneak Attack costs 2 and requires that the enemy be exhausted. Beat Cop makes you discard a four-cost asset. Guard Dog costs 3 and requires you to get hit. Dynamite Blast is amazing, but requires you to take out a second mortgage on your house. Zoey's Cross is great, if you're Zoey. And none of those are Seeker cards.

And of course, this is only ONE possible use of Blood-Rite. Want to do two damage? Pay a couple resources, and still keep your hand level. You really like the cards you drew? Discard two other cards instead. Absolutely love everything in your hand? Don't discard anything, and simply revel in your good draw luck. Strapped for resources? Good thing you have this poor man's Emergency Cache.

There is no doubt that this card is a rocking level zero event. The only question is whether you have a hand free to tote around Occult Lexicon as you wait for your two additional copies of it to appear.

Mordenlordgrandison · 287
An absolute must have in Mandy by the way. She can find all the copies easily and cycle through her deck quickly to get more. — StyxTBeuford · 12387 10/13/19
I'm going to use this to draw 2 cards, and then discard 2 copies of Fortuitous Discovery. Then i can immediately go for three clues, using resourceful to pull back the third copy of Fortuitous Discovery. Use it a 2nd time, then use Eidetic Memory to cast it from my graveyard for the 3rd/4th time depending on if i have used a 2nd copy of resourceful or not. — Abbojm01 · 4 2/10/20
This card is worth it just for it's ability to snipe Wipperwills! — WanderingTook · 1 6/20/20