After an enemy becomes engaged with you, exhaust Zoey's Cross and spend 1 resource: Deal 1 damage to that enemy. 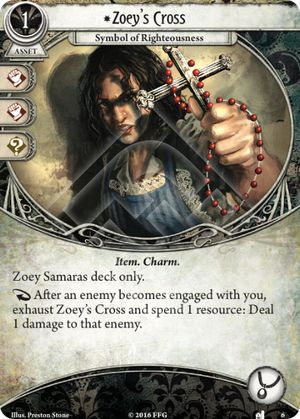 I would say this is the second-strongest investigator-specific card in the game, behind only Duke.

Zoey's Cross might not seem too amazing at first glance, because it inflicts a seemingly modest 1 damage per activation. But the 1 damage is guaranteed and action-free, and guaranteed, action-free damage is incredibly strong in this game. So, every time you fight an enemy with odd-numbered health (and there are plenty of those), you can kill the enemy in 1 fewer action than would otherwise be possible. That is amazingly useful and lets you win scenarios far faster than would otherwise be possible. If you combine it with something like Vicious Blow or Beat Cop, it will let you buzz through even-health enemies faster, too. And it works great with something like Lightning Gun--now you can kill 4-health enemies in just one shot!

And remember, every time the Cross saves you a fight action, you are not only saving time; you're spared a draw from the chaos bag, the necessity of committing skill cards to boost your odds, the chance of drawing the autofail or suffering a bad special token effect, and so forth. The Cross basically lets you skip a ton of skill tests and saves you a ton of actions over the course of a typical game. For an initial investment of only 1 resource, 1 action, and 1 card to put the Cross into play, that's incredibly powerful.

Unfortunately for Zoey, her odds of drawing the Cross are not so great, even if she mulligans for it. But when the Cross does make it into play, it makes Zoey an incredibly fast and efficient monster hunter.