Revelation - Discard cards from the top of the encounter deck until an enemy is discarded. Attach Smite the Wicked to that enemy and spawn it at the location farthest from you.

Forced - When the game ends, if attached enemy is in play: Zoey Samaras suffers 1 mental trauma. 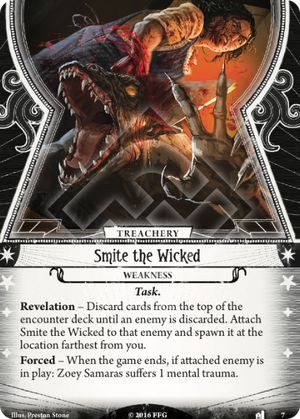 One of those signature Weakness that can end the Campaign. Looking at the two elements, the effect and the discard condition, we get:

The effect: Draw an enemy, then someone has to kill it by the end of the scenario or Zoey gets hurt. The nasty sting is that if Zoey is taken out by damage or horror, she ends up with 2 Trauma for her troubles. If you are unlucky enough to have this happen a couple of times, it's new investigator time. Fortunately, unlike Searching for Izzie, this card asks you to do what Zoey always wants to do.

The discard condition: Well, you discard it when the enemy gets killed, which is exactly what Zoey wants to do. It can be extremely variable, since you can draw a Swarm of Rats or a Servant of the Lurker. Drawing an Aloof enemy is, of course, extra annoying. It also benefits from the "loophole" that anyone can resolve it, so if a very weak enemy comes out or another investigator is combat-ready, this can be dealt with pretty easily. As usual with this style of Weakness, when you draw it is critical, as is the map. Drawing it one turn before Resigning or dooming out in The Unspeakable Oath is way worse than drawing it early in The Secret Name. It can take anywhere from 2 to 6+ actions to clear, so it is a very situational weakness. You can mitigate the effects with "Get over here!" or Righteous Hunt.

All in all, this is an above average signature weakness, maybe average if all of the investigators are combat-ready.

So playing yesterday as Zoey on Where the Gods Dwell, and some of you will already now know where this is going, and I draw Smite the Wicked and the first enemy I discard is a copy of Nyarlathotep.

So what's the interaction here?

I knew that StW overrode Spawn instructions but what about Peril/Hidden and Revelation effects?

In this particular instance it didn't make much difference as we were soon to fail, so I just added it to my hand and took a point of Horror damage.

But should of I spawned Nyarlathotep and he then behaves as any other Hunter Enemy?

screamingabdab · 31
When instructed to "spawn" an enemy, you aren't drawing it. That means no revelation abilities initiate, including any associated with the hidden keyword. In this case, that does indeed mean you'd get to fight that copy of Nyarlathotep as a normal enemy instead of having to find a Whispering Chaos treachery. For a non-weakness way of accomplishing the same thing, consider On the Hunt. — Thatwasademo · 44 6/15/22
(though, of course, since some of the copies of Nyarlathotep have quite a lot of health, you may or may not actually find fighting his pieces normally easier than drawing them as hidden cards and using the scenario gimmick) — Thatwasademo · 44 6/15/22
hmmmm, well that's good to know for future attempts of Dream Eaters, cheers. — screamingabdab · 31 6/16/22