Forced - If Dark Memory is in your hand at the end of your turn, reveal it and take 2 horror. 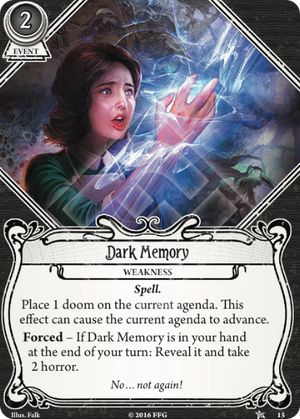 A review of a Weakness? Yep. Inasmuch as Weaknesses go, I "like" Dark Memory. It is unique among investigator Weaknesses (so far) in that it can actually have beneficial effects in addition to its harmful ones. [Possibly Baron Samedi and Smite the Wicked could be considered to have positive side-effects, but not quite as tangible as Dark Memory.] One of the features I like most about Arkham Horror LCG is that magic is frequently a double-edged sword. Positive effects often have negative blowback--as with Ward of Protection, Shrivelling, Blinding Light, Forbidden Knowledge, etc.--and negative effects can occasionally have a positive side-effect, as with Agnes Baker's innate effects.

Dark Memory falls into the latter category. While its negative effects--spend an action to play it, pay 2 resources, and gain 1 doom token OR keep it in your hand (taking up space toward your hand maximum) and take 2 horror at the end of each turn--are bad, both can have a silver lining for Agnes. In the first case, as a Spell, when played, Agnes can draw a card with Heirloom of Hyperborea. While this doesn't mitigate its ill effects, at least it's something positive, and Dark Memory is discarded. In the second case, Agnes can take one of those two horror on herself to deal 1 damage to an enemy at her location. Since her horror-for-damage effect is limited to once per phase and this horror is taken in the Upkeep Phase, this enables her to potentially deal damage with her effect in all 4 Phases. Yes, that's a lot of horror for Agnes to take; but, then, she's probably prepared for it with assets that soak horror, and healing from Fearless and/or Clarity of Mind.

All in all, if an investigator is going to have a weakness, it's nice if that weakness can also provide some kind of benefit as well. All the more reason Agnes Baker is one of my favorite investigators.

Herumen · 1370
The horror from Dark Memory is taken in Investigation phase. — Yury1975 · 1 1/21/17
@Yury1975: Indeed, you are correct. Dark Memory's horror is dealt at the end of the Investigator's turn, not the end of the round, as I had mistaken. Agnes can still take horror & inflict damage with her effect in all phases, though, since Ward of Protection will usually be played in the Mythos Phase and Forbidden Knowledge can be played in the action window of any phase, including the Upkeep Phase. Thanks for pointing that out! — Herumen · 1370 1/22/17
I am quite sure that if you choose to put a horror on an asset (item or ally), you cannot use Agnes's ability. — ramiz · 1 3/1/17
@ramiz: Yep, but since Agnes is likely to take more than 1 horror in some phases, horror-soaking assets can be used for any horror after the first, since her effect is limited to once per phase. — Herumen · 1370 3/8/17
Question: If this cars is the only Spell Arcane Initiate finds, are you inclined to take it??? — matt88 · 2037 6/26/18
@matt88 - Yes. Per the rules reference: When resolving a search effect, a player is obligated to find the object of the search should one or more eligible options be found within the searched area. — cb42 · 26 8/20/18
Okay let's all stop pretending like this isn't the absolute worst, deadliest weakness in the core set. It's a complete dealbreaker for me when it comes to playing Agnes. If you are playing a two player game it will take at least 7 actions, plus you need to pay 2 res to play it, plus it takes up a card slot until you play it. If your partner has Leo then in total the two of you are losing 8 actions (full round is 7 plus 1 for playing it). Scary card. — Andronikus · 1 5/19/19
After reading this review, I would probably say that drawing Dark Memory is about as positive of an affect as drawing Offer of Power — Zinjanthropus · 155 7/19/20
or maybe more like drawing Offer of Power over and over every turn in addition to whatever other encounters you're drawing — Zinjanthropus · 155 7/20/20