Play a Spell or Ritual card from your hand, reducing its resource cost by 3.

The power seized her, made her shudder and spasm.
Its energy united with hers, and then,
she opened her eyes…
Antonio José Manzanedo
The Path to Carcosa #33. 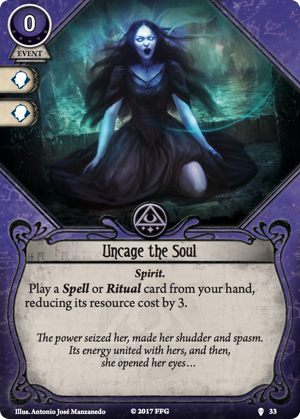 At first glance, Uncage the Soul seems to be a great 0-cost card able to lower the cost of any Spell or Ritual by a substantial 3 resources. A closer look reveals that its usefulness varies depending on whether the spell/ritual played with it is an asset or an event.

For spell assets, Uncage the Soul appears to live up to its promise. With 1 action (i.e., the play of Uncage the Soul) you can play a spell asset from your hand and reduce its cost by 3 (to an unstated minimum of 0). This saves an action over playing Emergency Cache then that spell. Also, as a cost reduction rather than a resource gain, it bypasses any effects that may prevent you from gaining resources. Another benefit over Emergency Cache is that, if drawn late in the game when you may not need its resource acceleration, Uncage the Soul can be used for its substantial 2 icons, while Emergency Cache would be a dead draw.

On the downside, unlike resources from Emergency Cache, Uncage the Soul is limited to Spells and Rituals, but this shouldn't be a problem for most Mystics . Also, whereas you would still have 1 resource left over if you used Emergency Cache to play a 2-cost spell like Clarity of Mind, Uncage the Soul won't give you a refund if the spell played costs less than 3 resources. So, to maximize its potential, you will want to use Uncage the Soul with spell assets costing 3 or more. Currently (as of The Path to Carcosa), the only such spells are Shrivelling and Rite of Seeking, in their various versions.

For spell events, the effectiveness of Uncage the Soul is hit-or-miss. This is largely because Uncage the Soul itself does not have the Fast keyword, nor is its effect a action. So, using it to play a Fast spell will still cost you an action, making it no faster than using Emergency Cache [though, Uncage the Soul may still be preferable to Emergency Cache for its skill icons]. It also means that using it to play a spell--like Blinding Light or Bind Monster--while you're engaged with an enemy will trigger an attack of opportunity before that spell resolves. Play of Uncage the Soul is also limited to the Investigation Phase, so it can't be used for cards typically played in other phases, like Hypnotic Gaze which would usually be played in the Enemy Phase, or Marie Lambeau's Mystifying Song which would normally be played in the Mythos Phase.

So what spell events does that leave us that can benefit from Uncage the Soul? Basically, any non-Fast spell event played in the Investigation Phase while unengaged, and preferably costing 3 or more resources. Soooo... Astral Travel, or maybe Agnes Baker's Dark Memory weakness. Lastly, using Uncage the Soul with Sefina Rousseau's The Painted World (which itself is a spell) raises the question of whether it would lower the cost of a non-spell event copied by The Painted World. I think the answer to that is "no" because The Painted World doesn't have a cost until it becomes an exact copy of the event it's representing, at which point it is that event for all intents and purposes. So if that event is not a spell, Uncage the Soul won't reduce its cost.

In general, Uncage the Soul seems to be less useful than first hoped. For Mystics or other spell-casters with expensive spell assets--namely Shrivelling and Rite of Seeking--in their deck, it is a good replacement for (or addition to) Emergency Cache or other resource acceleration for Uncage the Soul's action advantage and 2 icons. Since the pool of pricey spell assets is only likely to grow with future releases, Uncage the Soul should become more useful over time. On the other hand, its usefulness with most spell events seems limited. Though that spell pool--and presumably Uncage the Soul's usefulness--should grow over time as well. Or maybe we'll get an experienced version that makes Uncage the Soul more like what I had hoped for--a seamless action advantage and cost reduction for any Spell or Ritual. Perhaps something like: "Fast. Play immediately before you play a Spell or Ritual from your hand to reduce its resource cost by 3."

Herumen · 1270
There is always a chance *Fast* is coming in an XP version of the card — dys · 4 11/16/17
The other small benefit is that the resources don't sit in your pool - they are virtual, in effect. They are immune to loss (whether from #Paranoia or other treacheries), they don't get in the way of doing +2 damage with your #Fire Axe, etc. On the flip side, it is vulnerable to discard. I feel like discarding cards is far more common than losing resources, so it may actually end up as a con, overall. However, given that a lot of Mystics seem to splash Fire Axe as their combat back up, it might be worth having. — Ergonomic Cat · 31 9/10/19
I don't... Understand the FAQ clarification. Does it reduce the cost of a non-spell event copied with painted world or not? — Donel · 13 10/3/19
Donel: Sometimes FAQ clarifications don't really clarify much, do they? My reading was that it can be used to reduce the cost of any event that's copied by The Painted World — Zinjanthropus · 16 3/29/20
While I'd love to see an upgrade of this with the Fast keyword, I do think it is unlikely. With the exception of upgraded Scrying and the more recent Summoned Hound, fast actions are rare indeed in the Mystic cardpool. What I mean is there are many, and I mean MANY, Mystic cards I would love to have the fast trait, but given the cardpool as it is now, this doesn't seem to be the bonus Mystics lean into. They instead go for greater power with harsher consequences. With that in mind, I could see an upgrade of this card becoming an Asset that allows you to play Spells or Rituals from your hand at a reduced cost. However, to do so would make them come in with 1 less charge. That's what I would do because then the card would stand out more as a deck shaper (like Dark Horse) since it would encourage you to play many spell assets as opposed to a small select few. Or perhaps it would encourage you to pack cards that help you recharge spell uses. Just a thought. — LaRoix · 5 5/30/20
3

Though a more recent card brought into the card pool at the time of writing this, I am going to see this as a future staple for any Mystic investigator or any investigator being able to use cards from the Mystic class (Sefina Rousseau being the primary candidate for now).

This will be best for any Ritual or Spell card that is costed 3 resources or slightly higher, which means that putting out your Rite of Seeking or Shriveling will be less of a burden on your resource pool. The other great thing going for Uncage the Soul is that it does not cost a resource to play it. However, you want to get this card in the early game in order to gain its benefit towards putting out your spell cards. This is slightly balanced by the ability to pitch it for two Willpower points towards a test or anything needed at the moment that may occur.