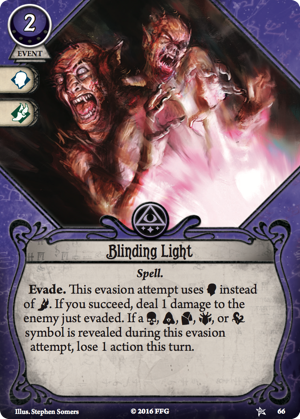 Blinding Light is more or less a filler spell to protect the caster until the real killer shows up. It's main strength comes from the willpower test against the enemy's evade value. The majority of evil servants have higher combat skills than evade. Advantage of being an event: you can instantly use it. The damage is just a nice bonus.

Drawing one of the special tokens during the skill test is particularly nasty, because you will typically want to do things after you evade without taking Attacks of Opportunity. Usually, you can not save it for your last action, because what are you going to to with your first two? ...

This spell's ideal application would be invocating it as a last action against big monsters that you need to tank and whittle down over the course of several rounds than against small targets.

I think this card is really underrated. The 1 damage is helpful, but not hugely relevant as any Mystic has a lot of ways to deal out damage. The true purpose of this card is to be able to evade with an event at level 0. Of course, there are competitors with this card for that exact role, but when you just need to evade something having this as an option is helpful.

While this card has largely been overlooked, this card might be seeing some new life in Jacqueline, who can pretty nimbly avoid the penalty on this card and who also has low base agility.

Soloclue · 2382
For a 2cost evade event for mystics, ethereal form is simply miles ahead — niklas1meyer · 1 4/26/20
2 cost evade with no boost is a hard sell, especially since the potential downside is huge- evades are almost always your first action if you're doing them because of AoO. For the same cost you get 4 evades out of Mists. For a one off, E-Form has a huge upside and is more likely to hit. Maybe if you're doing a super evade heavy Mystic deck, but I'm not sure how useful that is. — StyxTBeuford · 12744 4/28/20
The 1 damage also kills some vengeance enemies in FA which you don’t want. — Django · 4428 4/28/20