Move. Move to any revealed location and reveal a random token from the chaos bag. If you reveal a , , , , or symbol, you must discard an Item or Ally asset you control (if you cannot, take 1 damage).

Extradimensional travel had its risks, he knew. But who could resist the frontiers beyond time and space?
Adam Schumpert
The Path to Carcosa #34. 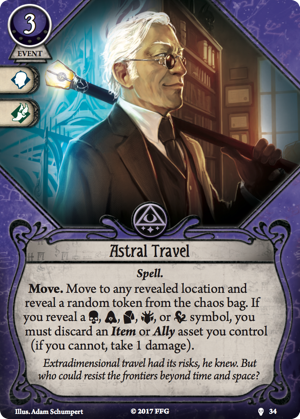 I'm not convinced about this card. I don't feel like Move actions are the most difficult actions to take in this game. I understand very well the "action compression" it provides, for example if you need two Move actions to get to where you wanna go. But here's the catch:

Very situational at least, and until investigators have a way to switch easily cards like Adaptable, it will probably not see much play.

banania · 360
Neither am I. — XehutL · 46 9/13/17
.. I mean why this, if we have cards like #Elusive ? — XehutL · 46 9/13/17
It's a decent one of card in my opinion. There should be a situation in each game played where this would save a couple actions mid to late game and make the scenario easier for a good amount of investigators, but it's not amazing or anything. It might even get an upgrade later that let's it happen to a non-revealed location or something which would be enticing. — Bronze · 161 9/20/17
Note you can Uncage the Soul to play this for free. — clydeiii · 37 10/16/17
Moving does suck sometimes when you have to pass a test to get in or out of a location, but since this action is an explicit Move action, it won't even help you with that. Seems like a pretty weak card. — donkler · 1 10/24/17
I had a situation in The Pallid Mask where a location connecting the two key locations was divided by a location requiring an agility test (and I drew an encounter that made that spot dangerous if you stayed there till the end of the turn.) Astral Travel saved our mystic from needing to pass by it. — Lemmingrad · 15 2/7/18
I don't think that the action per resource ratio matters here since investigators rarely spend actions for resources (plus, you get a free one every turn). Like Bronze said, it's a good 1-of card that can really help you get where you need to go when you need to get there. — dr00 · 7 3/26/18
This card functions REALLY well in Carnevale of Horrors, where time is at a premium and locations can be difficult to get through quickly. Have your Mystic grab an innocent bystander, and (poof), they're saved! — Sarkazein13 · 1 6/11/18
Well, maybe my review was a bit too quick on this card. These days, I tend to include 1 copy of this card in every Mystic deck I built, because there are scenarios with lots of revealed locations, and sometimes you just want to be able to go back to that "resign" location. Situational, but can be a game saver. — banania · 360 7/13/18
doesnt look very impressive but this card won me several games now on father mateo in my dunwich campaign. — lyii · 1 8/13/18
I feel like this card should be an asset, like arcane slot, (3 charges), ->Move. Move to any revealed location and reveal a token etc. — LeFricC&#39;estChic · 81 9/1/20
2

It might not be worth the slots in your deck, but I wonder if this is Luke Robinson's get-out-of-pointless-reality card. You can ignore the 6 shroud investigate OR horror penalty and just use this action to move away.

Giffdev · 55
True, the pendant of the queen also does the job though its a lot harder to assemble than just finding an astral travel — NarkasisBroon · 1 10/4/19
That's one way, but considering you'd move to any revealed location at the end of the phase anyway, it's probably easier to just cancel or tank the 2 horror. Mr Rook can eat it for you while also fetching the weakness, Deny Existence is amazing, and Rosary/St Hubert's Key are probably already being run. — StyxTBeuford · 12593 10/4/19
At 3 ressources this is very expensive and has about 1/3 chance to discard an important item or ally. — Django · 3807 10/18/19
Also, you would never want to Astral Travel out of Pointless Reality without a throwaway Item already in play. You really don't want to draw a spooky token while resolving Astral Travel and be forced to discard your Gate Box. — ClownShoes · 25 7/3/20