In between each game of a campaign, you may swap up to two level 0 cards out of your deck in exchange for an equal number of level 0 cards. (You must still follow all deckbuilding rules for your investigator). 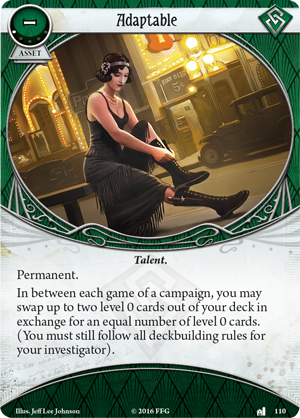 There are quite a few people that I have already heard giving this a sub-par rating, but I couldn't disagree more. I think that this card is an auto-include in any rogue deck that can pick up a level-1 upgrade such as "Skids" O'Toole, Wendy Adams or Jenny Barnes.

If you are going to swap out a single card (ever) this has already paid for itself. You can put off paying for it until you are going to want to swap things out, but honestly there should always be considerations of swaps in decks after you start playing it. No one's deck and design comes out perfect. Decks start out with certain themes and elements and should always find tweaks and personal preferences.

As we are playing, new packs come out all the time. With those new packs come other level-0 cards that you will most likely consider. And when you can swap them in for free with your current deck on the fly with those releases and become much easier to get those new shiny toys interacting with the cards you have been building around.

So far, it has already saved me 4 experience. Would all of those been done if they weren't for free; no (perhaps 1 or 2). It lets you be "adaptable" and improve yourself. Challenge your deck after every play through and every pack release. I think this is amazing. And paired with Charisma coming out in the new pack, I will likely use Adaptable again to build some additional allies themed into the deck after this purchase so that I can get a nice array of different characters for my Jenny Barnes deck and build on a nice new style of play. So, while others are seeing this as mediocre, I wanted to put my opinion out there. I think this card is amazing.

Bronze · 171
I could see a strong use for it in multiplayer, where a poopular unique asset belonging to one player gets dropped from their deck as time goes by. The rogue can then pick it up later on for free. — Calden · 2 2/23/17
Coudnt agree more.... An auto include if the deck building rules for an investigator will allow you to use it. Becomes even better if you play a campaign after the first run, if you know what you can expect this cards lets you make the neccecary minor tweaks to a deck at a great discount. — Heyenzzz · 5296 2/24/17
Agreed, much better in practise than theorycrafting would suggest. — The_Wall · 261 2/25/17
I think this card will shine later in a campaign. As you upgrade cards, you change your deck and some of the level 0 cards no longer pair as well with the higher xp cards as they did when you build the deck to begin with. Now you can make all the necessary changes for just 1 xp. — Lord Elros · 1 4/21/17
OP's description is spot on. If you're ever going to swap out a card EVER during a campaign that isn't a straight upgrade from one level item to another, this is pretty much a no-brainer include. — Trilkin · 2686 4/24/17
This looks useful for Lola honestly — SilverMagpie · 1 4/7/19
Can you instantly swap two cards right after you buy this ? Or do you have to wait until after the next game ? — Darkangel23 · 1 4/28/20
One really basic application is money cards. Stuff like Well Connected and Money Talks get better once you have high level rogue economy cards — Zinjanthropus · 213 5/30/20
there is only only bad thing about this card .. its not neutral — miraculix · 1 7/14/20
8

The previous reviewers have stated the benefit(s) of this card: providing versatility and the ability to make changes in your deck later in a campaign. A good example someone gave is with Sleight of Hand. Until you spend the xp to get Lupara, you don't need Sleight of Hand yet.

Correct me if I'm wrong, but Adaptable also lets you swap out the out-of-faction cards in your deck too!

For example, the Dunwich Legacy cycle investigators (Jenny the Rogue) are allowed up to 5 level 0 cards outside their faction. With Adaptable, you can choose those 5 colors to serve a particular purpose (maybe, make Jenny into a decent clue gatherer with Seeker cards). Then, once you have the xp for the amazing Rogue clue-gathering cards (Lola Santiago, Lockpicks), then you can substitute those Seeker cards for different cards (maybe something to make her more able to handle enemies so she can investigate locations alone).

TLDR: Adaptable lets you swap around level 0 cards, across ALL factions that investigator is permitted to include in their deck. Versatility, from being "Adaptable", can improve efficiency and survivability.

The card is nuts! I always buy it if I can.

If your deck-building game is strong you can probably go without it. But when I play with my GF we never spend much time on building a new deck. We grab all the cards we consider good for the build and go with it without a second thought. Of course we never have clear idea about what upgrades we will make. This means rarely sub-par cards are taken with the idea they will shine once certain upgrades are done. And having to spend XP on level 0 cards we failed to take initially is a major pain.

Here comes Adaptable! You can start with whatever cards you want and once you grasp the dynamics of the investigator and the team needs , you can make changes accordingly. Last time I played Finn, I started with 25 unique cards (single copy). With Adaptable I easily got second copy of what proved good, and dropped the useless.

Why take Sleight of Hand from scenario one? Why not take the Luparas/Typewriters/Derringers first and swap cards that help more in the early campaign?

Lots of freedom to change your deck at little to no price. For me that card is pure value and if you are not playing it - you should!!! There is not a single drawback I see.

During upgrading you can first upgrade your cards with reduced xp cost, then swap Down the Rabbit Hole for another card an then buy new cards.

During next upgrading do the other way round, first buy then swap and upgrade if necessary.

You could even use Adaptable twice to do it on the same turn.

Or am I wrong and abuse this too much?

GrueneLupenAufheben · 90
This had been declined in the FAQ: If I purchase a permanent card for my deck, like Charon’s Obol ( 308), can I later remove it from my deck? Not unless an effect explicitly allows you to do so. Generally cards are only removed from your deck if you purchase a new card and must swap out an existing card in order to reach your investigator’s deck size. However, since Permanent cards do not count towards your deck size, they cannot be swapped out in this way. There is no rule which allows you to remove cards from your deck at will. — Susumu · 271 1/12/22
However, with Versatile it still might work. Let's say, you have access to neither Mystic nor Seeker cards level 0. Then you might be able to swap out DtRH for "Shrewd Analysis", because that becomes your one leagal "other class" card, and you have to remove DtRH for it. Any opinions on that? — Susumu · 271 1/12/22
Instead of trying to be clever, why not just give your investigators +10 XP at the start of the campaign? It's your game and if you want to break the rules, go for it. And if you want to play by the book, remember that the design intent of cards that reduce XP costs or give you XP (ie. In the Thick of It and Arcane Research) has always been to slap them with a hefty downside. Besides, Susumu is right. 'Permanent' is almost as absolute as 'cannot'. — thinsilver · 8 1/12/22
The more I think about this, the more I'm convinced that it works (but is clearly not an intended use). Adaptable gets around the "no way to remove permanents" restriction (which isn't really a restriction; it's just an observation about how the rules don't intrinsically provide a way to remove permanents) because it is an "effect that explicitly allows you to do so", as per the FAQ. Also, since 'swap' is distinct from 'purchase', I see no reason why versatile shouldn't be able to add an EotE permanent to your deck inbetween any two scenarios. — Tynian · 1 1/14/22
Err, sorry, when I said "no reason why versatile", I meant "no reason why adaptable". I always mix them up... — Tynian · 1 1/14/22
The rules state "A card with the permanent keyword still counts as being part of your deck." Adaptable lets you "swap up to two level 0 cards out of your deck." The rule mentioned by Susumu is generally for normal upgrades. The card rules always overwrite the rule book. Therefore Adaptable should let you swap permanents out for other cards. — SpicyNugy · 2 8/3/22
I am not sure how this works with Down the Rabbit Hole though. Can you chose the order these cards resolve? Can you use Rabbit Hole to upgrade a spell, switch Rabbit Hole out with Adaptable, upgrade another card at no penalty, switch Rabbit Hole back into the deck, and upgrade a second spell discounted? This obviously feels way too silly to be allowed. It is a fun thought experiment and the rules should be clarified. — SpicyNugy · 2 8/3/22
This is now explicitly covered in a "Rulebook Errata" FAQ entry (v. 2.0, p. 2, emphasis mine): Add the following bullet point: “Once added to your deck, permanent cards cannot be removed from your deck **or swapped out of your deck** unless explicitly stated otherwise.”" — JoshWVS · 9 8/26/22